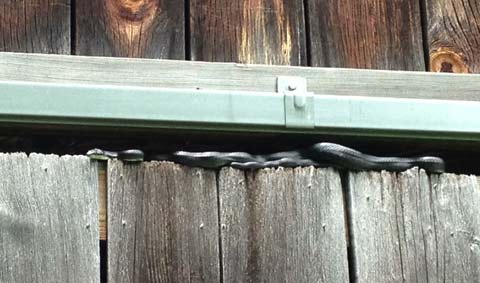 I know for a fact that this is the kind of thing that gives far too many people the creeps, and so I understand and accept my eccentricity in this regard. Looking up to see the five foot long black rat snake sunning himself on top of the barn door made me grin where most would have shuddered or gone to fetch the rifle.

He was there the next day as well, not surprisingly, since this south facing wall and a horizontal repose some 10 feet off the ground was a great, protected place near the barn loft and its associated small edible creatures. Take some sun, snack a little, then go explore.

I suppose he was exploring yesterday when Ann opened the gate to the chicken yard and spotted him lounging in the upper story of the hen house, hens out ranging free at the time. I’m not exactly sure how I heard her holler, except that when Mother Hen hollers for fear of her chicks, the volume is sufficient to muster the Army of One, even over the loud murmur of the creek.

Said army made contingencies last year for just this kind of battle. Although this was a smaller snake than Jumbo who attempted last year to swallow an almost-grown hen, because this somewhat smaller specimen was deep inside the coop with several roost bars and such to wrap himself around, I decided for the first time ever to use something other than my bare hands for the extraction. 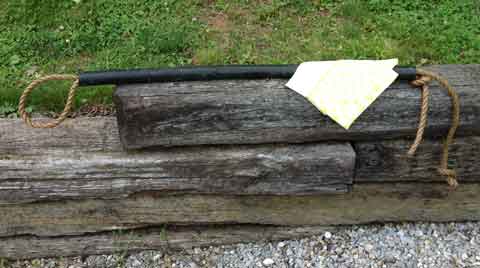 At the end of last summer, after my third or fourth run-in with Jumbo with an egg in his mouth, I decided he needed a road trip. Then he wisely disappeared for the season. But because of this, yesterday I was fore-armed with my handy-dandy snake noose, made from a piece of flexible pipe and a bit of nylon rope as pictured.

And that is when the dance commenced–me, the snake, and the prancing wife, round and round, first movement performed in the chicken yard. The suspect was at first calm and cooperative, then less so, coiling, tail rattling, and finally made a run for it, resisting arrest, smart enough to avoid the loop at the end of the rope. But not for long.

Snake is now in “hand” and several pounds of him dangle from the noose. Ann refused to hold the pillow case fetched for containment. Capture-apparatus plus writhing snake is passed awkwardly to leaping assistant. I open the sack, pull snake’s back end from the roost bar he has since managed to grab firmly onto, and slide the yellow pillowcase up over the length of the body like a sock until contained. Whew!

Back at the house, she ran to get my car keys for the Reptile Road Trip, during which time the inmate became an outmate. Seems there was a hole in the corner of the pillowcase. Noose is redeployed, more running, more excited near-hysterical exhortations as if this was a Gaboon Viper and I was a swooning school girl, and finally, the poor wild creature was contained in a blue pillowcase with ruffles.

She drove. I executed the live release a mile from the house. I’m not saying which direction, given the strict prohibitions of the Herptile Rehousing Administration. Suffice it to say there are empty barns nearby, and mice just as tasty as in our barn loft. But not serving chicken wings.