fred Posted on May 6, 2014 Posted in nature, PhotoImage 1 Comment Tagged with botany

As a graduate student majoring in Vertebrate Zoology at Auburn, I was an 11th hour convert to botany. I’ll tell that story another time.

And for that shift of attention and interest towards the plant world, I have ever been thankful. This epiphany has meant that, ever since that conversion in 1970, in every forest I see the trees. There are no anonymous, amorphous green places. Green places have faces, you might say.Â

And in them, I see old friends, as I have alluded here several times lately. Even across wide swaths of countryside quite distant from where I learned my botany and where I live today, I recognize old acquaintances, or can tell that newly discovered flowering plants are the kin of those I know back home.

In coastal Mississippi last week I had hoped for more opportunity to revisit the salt marsh familiars I first saw and got to know 40 years ago at the home place–the former home place–on Biloxi Bay.

We used to see many wetlands (pine pocosins, to be accurate) along the roadways along highwayÂ 90 (before I-10 was built) that were showcases of salt and sand-adapted plants. Many were showy and conspicuous. We saw none of that this trip. And more perhaps about that sad fact at a later time. 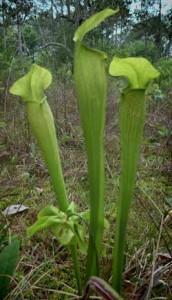 Suffice it to say that I was pleased to see a few old phyto-friends. I confess it took me a few minutes to bring up the taxonomy ofÂ yellow milkwort, Polygala rugelii, the featured image here. But somewhere in the archives of latin plant names long latent in my brain, I retrieved the genus and was pleased with that.

The insert here is what Ann’s family used to call “Buttercups” but is actually one of the Sarracenia species of “pitcher plants” notable for the fact that they supplement their nutrient needs (the sand they grow in is nutrient poor) by digesting insects in the enzyme-rich fluid inside their slippery-sided tubular leaves.

I regret this image is not sharp, but then I was slowly sinking (in my only pair of shoes) in the muck of this wet margin along the edge of a pasture, and had to grab it and run.