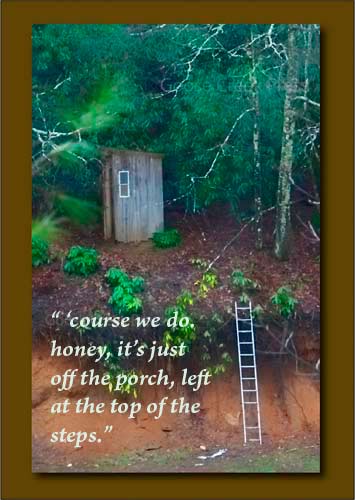 NOTE: Really enjoying the captions, keep’em coming, at least through Friday, then I’ll decide where to go with this. ’cause I gotta go. Someplace.

I can see this becoming a post card. It was just too good a visual story to drive past yesterday; I had to stop. And even while I was framing the picture, it was begging for just the right short bit of understated text that said enough, then let the image do the rest.

The caption shouldn’t be cruel or derogatory of those who still have (or before the recent excavation here had) a working outhouse. It shouldn’t stereotype dirt road residents of Appalachia. It might include a word twist, double entendre, or pun, don’t you think?

I’m thinking maybe something simple like “Climbing the Ladder of Success.” I just noticed that the ladder is missing a rung. How appropriate.

So. Offer your best caption. I’ll use the winning submission when I have Wordsprint run me a couple of hundred, and send the winner a few copies.