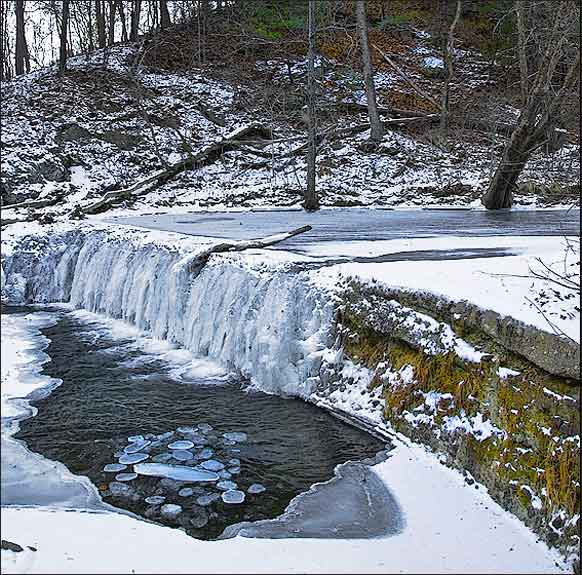 Continued from Ice Follies Part One…

So– there I was, duck-squat in the middle of the road. I could not go forward nor could I go backward. The slightest movement threatened to send one foot east and the other west, ski poles north and south.

And, whilst hunkered there in this most bizarre of postures, it occurred to me that–if the mail must go through– then the postman would be coming round the bend at any moment. He would hit the brakes–and forward momentum send him right over me, helpless in the road. I broke out in a cold–a very cold–sweat.

Alas, the mailman didn’t come. He hasn’t come. Isn’t coming. The mail won’t go through today, apparently.Â Some peopleÂ have enough sense to stay indoors on a day like this. The mailman did not witness this spectacle, and I was spared the embarrassment of explaining that no, I was not laying an egg in the middle of the road.

Eventually I inched my way across the road in an ungraceful waddle. And, hurrah, I got to the board before it was swept away.

But, for all my risks, the plank was irretrievably locked in ice and I could not budge it, even using my ski poles as a pry bar.

There was, in this heroic effort, one sudden loss of traction under my boots while leaning and tugging at the board. A brief terror saw me bobbing along in the torrent, a bug in the storm drain of life.

More cold sweat. I scooted cautiously back up the bank on my cold, wet rear and sighed a steaming-vapor gasp of relief.

Finally, defeated, I quacked my way back across the road–no more gracefully than I had come–mission unaccomplished.

When I finally reached the welcome warmth of the dry house, I took off all my dripping wet gear and went upstairs to give Ann a report. She must be frantic!

Wrong. She had been sewing for at least an hour and had not missed me. Had I fallen in the road or into the creek,Â I’d still be out there.

But by morning, the plank will have surfed south down the raging creek. Hopefully, it will lodge in a tangle of alders along the bank, and we’ll go fetch it back home when the weather clears and the road is neither luge or kayak run. That might take until sometime in April. Sigh.

I don’t know which is the worse to suffer: the cabin crazies or the winter things we get into when we go out where fools fear to tread. Or waddle.

Fragments From Floyd: Oak Under Ice