↓ Skip to Main Content
Home › Environment › Outdoors › Into the Bush: War of the Roses

Into the Bush: War of the Roses 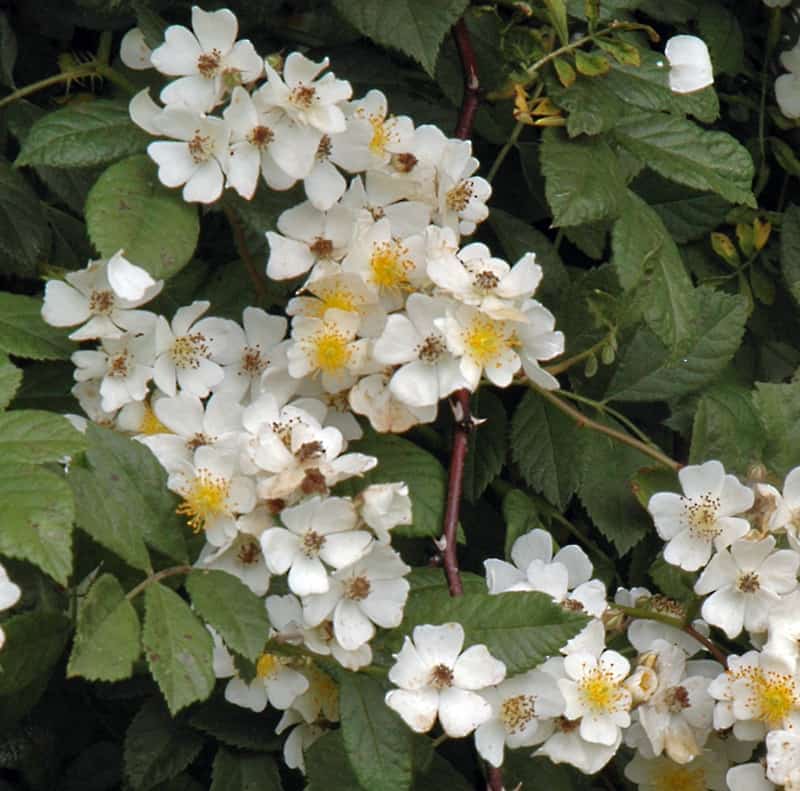 I was feeling my oats during the cool early morning yesterday, so decided to tackle one of two of the more physically-demanding tasks on my Farm and Garden to-do list.

The easier road (not taken) was to start digging up the five chain-link fence posts set in concrete around the snow-impacted and now-defunct chicken yard. That was the less off-putting of the two jobs, and it could be done in the later afternoon when that side of the barn is in shade. So in my supercharged zeal I went straight to the bottom of the list.

I foolishly chose to attack the large and spreading multiflora rose on the creek that we see during our summer meals from the front porch.

I have longstanding guilt for doing nothing about the MFR mothership that drops spawn into Goose Creek, only to hatch and grow and overtake cities and towns between here and the coast, its loathsome babies climbing up to earth on somebody else’s creek bank.

Today, after years of stunningÂ indifference to the green pestilence I would get up and do what needed to be done.

However, MFR removal is not a task for the thin-skinned or faint of heart. This is true even when the offending upside-down octopus of a thorny plant lives on level and open ground. This one had to be approached in rubber boots while slipping and sliding around in the creek.

The outer perimeter of canes were newer growth–still smooth and green, arching out into the flowing water. They were easy to cut, but then I had to pull them away backwards upstream, stepping by feel alone on the slippery rocks, to drop vine by vine ten feet upstream. This is very very slow work punctuated by frequent sound bubbles whose language cannot be displayed here.

After working to clearÂ the perimeter of The Beast for a half hour, I reached the central canes that were more than an inch thick and too big for the long-handled loppers. Once cut (with the chain saw–on the slippery rocks), these serpentine canes alsoÂ had to be pulled upstream and out of the way, with all the force I could muster, feet braced insecurely on the algae-slick rocks, minding the thorns. Mostly.

Let me say an unfriendly word about the thorns, for those who never threw themselves intentionally into such a briar patch. They are not your low triangular prickle of an ornamental rose, but instead are more like curved raptor’s beaks, say, the horrible hooked bill of an osprey.

They adorn the canes–which can grow up to 30 feet long–at close and regular intervals and can pierce even a heavy pair of leather gloves. I can vouch for that.

So if this is starting to sound like something you’d like to rush right out and do, let me add one more encouragement. You may not be alone. And I’m not talking about snakes. Snakes, I am happy to run across in that setting near the creek–just water snakes, queen snakes, no problem.

Early on I’d stopped in my tracks a number of times when a buzz close behind me caused me to check out the source. Each time, the sound came from bumble bees working the lovely Virginia Waterleaf that adorns the opposite bank from my target MFR.

But there was this one white-faced hornet. I kept seeing him range back and forth in front of me. I figured he was just browsing the foliage for spiders and such to feed the brood back home some place a safe distance away.

I stopped my work to watch where he went–down into the shadows near the base of the last three canes I would need to cut and paint with Roundup to finish the job. (Yes, I hate the stuff. A drop on the cut canes works and leaves little glyphosate in the soil compared to broadcast spraying of the tops–which is not effective anyway.)

Then another whiteface, and a third, all disappeared near the base of the three canes.

OkkieDoke. My work for the day was done. I’ll come back in late fall and take care of the intact canes when their guardians leave behind their round paper nest–that I did not attempt to actually confirm down thereÂ in the shadows.

SHE, however, Â wants to go out in the cool morning dark and douse it with gasoline. I will wish her luck with that as I stand in my robe on the front porch with my coffee.

6 Comments on “Into the Bush: War of the Roses”