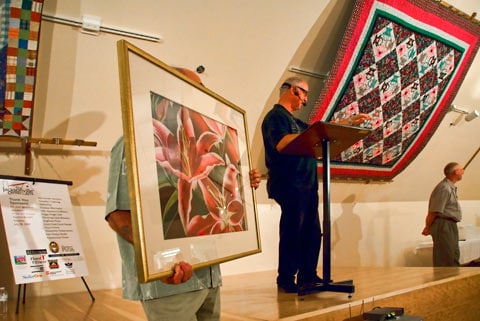 I was asked to take pictures at the event last night, a terrible idea. Next time, find somebody who’s not hungry, so needing two hands for the camera, one for wine and one for a plateful of wonderful food will not be an issue.

And recruit somebody from out of town who doesn’t know anyone and won’t be pleasantly sidetracked into one conversation after another, spending way too much time chewing and chatting and not nearly enough snapping the shutter.

Auctioneer Ken Farmer we remembered from farm auctions in the Wytheville area back in the early 80s. Heck, he might have given us the winning bid on our old oak table or antique foot locker that’s since then been full of material scraps Ann will use one day–same scraps traveling with us now for almost 30 years. One day, indeed.