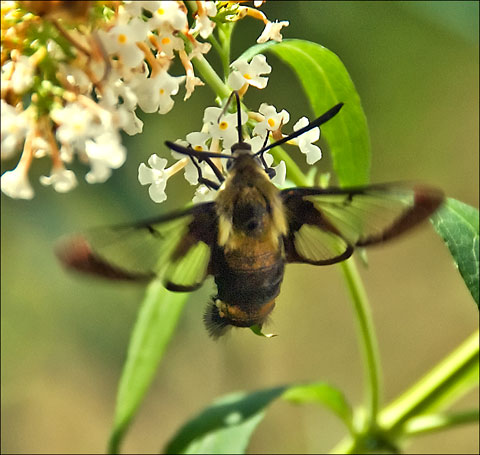 The Butterfly Bush just outside my window: how many words and images have been devoted to it over the years since this blog started in June 2002? It is a microcosm-aggregator of summer life, and when its blooms fade, life changes chapters, rhythms, and focus. So this year’s effort at a portrait of a clearwing moth (and a couple more pix I’ve yet to show here) are symbols for changing times on Goose Creek.

It has been an unusual season–so much so that I might have to take back all those nasty things I’ve said about summer. This one I did not loathe. I never put away my flannel shirts and am wearing my Va Tech sweatshirt this morning as usual all summer long. We slept with the oscillating fan a total of one night this summer. The globe spent all its warming energies somewhere else this year and spared our always-cooler than average valley.

It is not just our garden that has been free of some of the normal summer vermin: Japanese beetles, Colorado potato beetles, and the like. I don’t have any idea if that is a good thing or a bad omen of systems collapsing for things other than honeybees. The buckwheat I planted to attract pollinators was a miserable failure: two honeybees was the grand total observed simultaneously. Many of the tomato flowers did not get pollinated and simply withered producing no fruit. And the tomato vines are dying already with lots of unripened green fruits, nights too cool to bring them from green to red.

We sorely need rain. The neighbors “up top” on the hardtop are without water. Just having a house full of company for a few days, what with extra showers, flushings and dishes to wash, has depleted their well reserves. A friend of Ann’s a little further down the road also now has a dry well. We’re 400 feet lower elevation than those houses, so hopefully have more aquifer charging our well down here. But it’s about time for the gentle edge of a tropical storm to swirl her wet gossamer gowns across our parched pasture and brown garden.

On another note: Yesterday, I took a significant step towards getting prints of my photographs “out there”–beyond a mere web existence which has been the case since my digital shooting began in 2000. I’m having three (chosen from the dozen I’ve printed on the Epson 2880 in the month I’ve had it) to be framed.Â  And not just any frames: let’s just say these will be special. And you can see them at the Jacksonville Gallery showing coming up this fall.

Why are my eyes so blurry? Oh yeah: it probably has to do with the fact that we’ve been awake since 1:30 when the Murine (mouse) Olympics began upstairs. As Ann noted just now, it seems to happen every year about this time. Like I say, there is change in the air. And there will be DeCon for our visitors–not running wind sprints on the carpet in the upstairs room but in the space between our bedroom ceiling and the upstairs floor. (How do they run so fast in the pitch black dark, and where do they get those cleats they wear on their boots to make so much friggin’ noise?) Years ago, I drilled a hole in a flooring board inside the uncarpeted closet, into which later this morning I will funnel some tasty green pellets for our guests. Bon appetite!