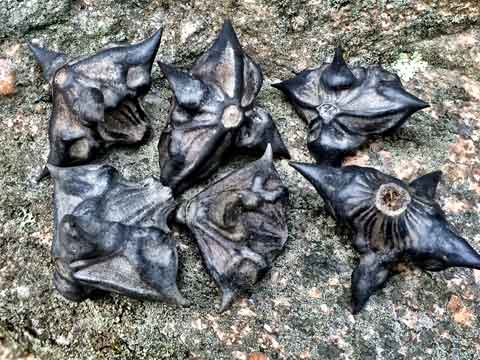 And it turns out that the name we gave it– “Devil Pods”– is one of the historically-used “common names” for this plant. It took us a while to finally conclude that it was indeed a plant, since the pods seem to be made of a very hard alien material rather than any botanical matter we’d ever seen.

So had concluded at first that these were actually baby Klingons, dropped at Kingston Point Park along the Hudson. But then I knew that I had seen images of this bizarre thing from the web on Planet Earth, so as we drove towards our next destination (Massawaska State Park) I attempted to ID the six (empty non-viable) pods we brought with us.

And in this I failed. But my friend’s daughter back home that evening googled “Catskills black seed” and it was the first item listed. Go figure: the range extends from Virginia to Canada. And a friend for dinner that night–a kayaker–recognized the pods immediately and with some loathing as “Water Chestnut.” And it has both a good and a bad reputation–the former, back in Asia from which this invasive derived, the latter among those who fancy open surfaces onÂ  waterways.

“Water chestnut was first observed in North America near Concord, Massachusetts in 1859. The exact path for the introduction is unknown. It has been declared a noxious weed in Arizona, Massachusetts, North Carolina and South Carolina and its sale is prohibited in most southern states.

“Water chestnut can grow in any freshwater setting, from intertidal waters to 12 feet deep, although it prefers nutrient-rich lakes and rivers. Presently, the plant is found in Maryland, Massachusetts, New York and Pennsylvania, with most problematic populations occurring in the Connecticut River valley, Lake Champlain region, Hudson River, Potomac River and the upper Delaware River.”

I should mention that we found these botanical land mines on a sandy beach near the volleyball nets. I still think they were dropped on our planet with sinister intent. That’s my story and I’m sticking to it.