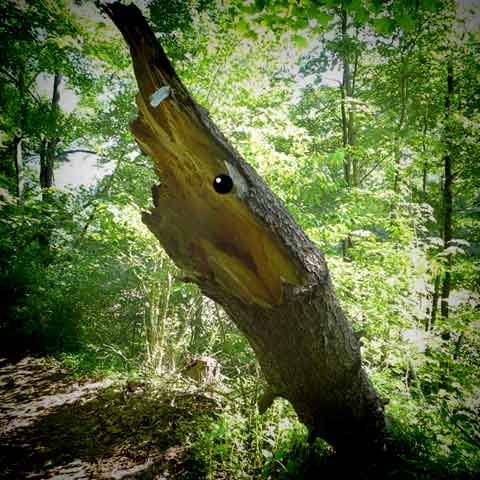 The very large white pine had been leaning since we moved here, lodged in the crotch of another tree thiry feet down the slope. Every year it leaned a little more, until an ice storm the past winter.

We walked down the New Road one February day, and it had snapped, crashing down on a half dozen smaller trees and burying them in sticky green boughs.

My impulse, while clearing away the tops, was to take the trunk out of our way so I could drive down the New Road to the back of the land. She would not have it–at least not until the grand daughters got to see our “land shark.”

So the time, now that I’ve gotten a memento of the fallen fish (with a fake eye added for effect) to fillet the sucker with the chain saw and get its carcass out of our way.