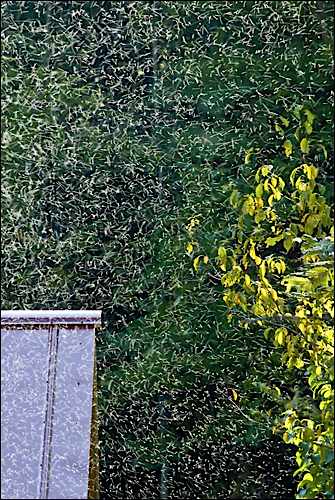 Gary Larsen had a family favorite cartoon when our kids were small. The lumpish father glances out the window and finds the entire neighborhood covered with gooey slugs–a celebrated event in Larsen’s twisted cartoon household.

I will admit, we don’t get so excited every year when we celebrate our own seasonal repeat performance not quite as pleasing as the swallows returning to Capistrano: the hatching of the gnats. And we’re not talking just a few.

Yesterday’s images gave you a tight shot that, at 1/15th of a second exposure, revealed the zigzaggy pattern as each tiny insect lifted and dropped in the warm afternoon sun. (I think this is a mating dance of sorts.)

Today’s picture shows the swarm in context. (Click image to enlarge) The next day there was no repeat performance. Had there been, I was going to slow the shutter speed even more with the camera on the tripod to create even longer flight trails.

For some reason, they really liked the bright verticals of the garden posts and were many times more dense there than even five feet back. Ann was mowing grass on the other side of the creek while I was taking these pictures (happily no one drove past to wonder “what th’ heck?”) and she was not bothered by them at all.

By the way, this particular insect (that I assume hatches from our creeks) does not bite, does not buzz your ears and doesn’t seem at all interested at getting indoors–in contrast to the bloom of Asian Ladybird Beetles that erupted yesterday as expected a few days after our first frost in October.

(If you enjoyed this buggy mystery, consider submitting it to StumbleUpon or Digg so others can find and enjoy!)

5 thoughts on “Look Children! The Gnats Are Back!”