“Her picture just doesn’t do her justice” you might have heard someone say about an unflattering or lackluster image of one with greater beauty than the photographer was able to capture.

I know the feeling. I find it hard to do justice to ferns shooting them where they live.Â  They are always more attractive than I make them look, and that’s a disappointment.

One problem is isolating them so that they are distinct from their typically cluttered forest background. 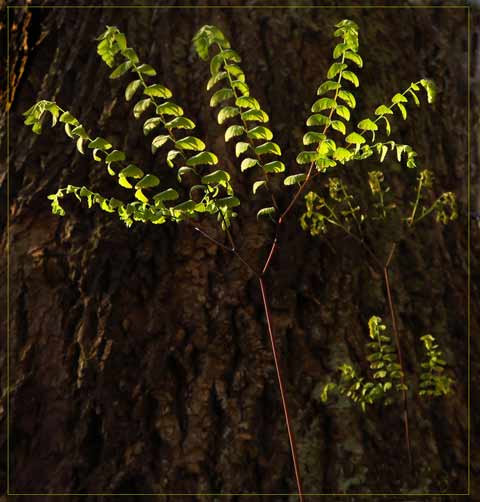 In this case, I managed to frame these maidenhair fronds against the bark of a very large tree on a very steep hillside. Take a look at what I had to do, composition-wise, to get this shot. See it in context here. 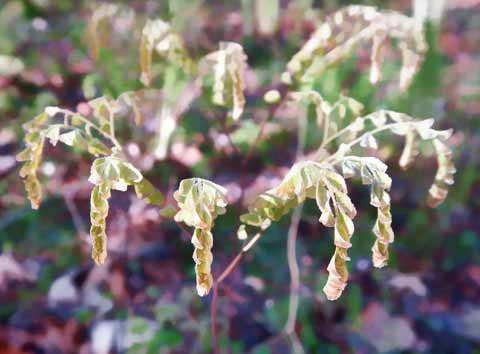 Ferns have showy leaves or “fronds” that are divided one or more times into smaller segments or leaflets called “pinnae.” But it is not easy to attractively or interestingly show the shape of the frond, the details of the pinnae, and the depth of the entire plant. You can sense the three-dimensionality of the plant in this image, but it only hints at the attractive symmetry and form.

In the case of the northern maidenhair fern, its frond is typically forked into two segments, each resembling a kind of spreading necklace of delicate pinnae. The one above has just unfurled, and has not become the ultimate dark green of the mature plants, like the one below. 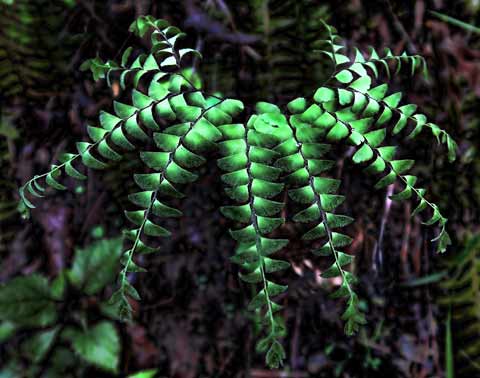 Lastly, this individual was growing on the side of a bank, so its frond dipped outward, affording a proper view of the elegant necklace of tiny green wings.

As with wildflowers, except maybe more so because most ferns are many times taller than wide, is the fact that the slightest breeze sets them swaying. As if focusing on a fern was not already hard enough!

So while the ferns “show what God can do with a leaf” as Thoreau once claimed, it is generally going to make you want to spit trying to show their good side.

2 thoughts on “Maidenhair Ferns: Finding Their Good Side”