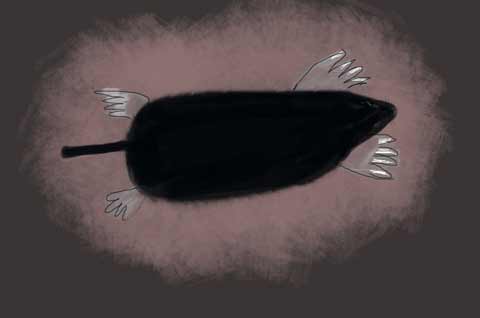 Yesterday morning was dominated by back-t0-back moles, dug fresh from the soft earth of Goose Creek by young Gandy, who is beginning to match her predecessor’s acumen for locating and extracting the squirmingÂ suedeÂ sausages for some brief (or agonizingly prolonged) period of play before their batteries give out.

Two six-inch-long half-pound eastern Moles joined us within ten minutes of the end of the first one and the excavation of the second, not twenty feet from the back door. (The pasture soil is so heaved and tunneled with mole burrows that it feels like walking on wet bread. There is a great role for these creatures in open pasture in their eating of Japanese beetle grubs and aerating the soil via their tubeways. In our garden, they are not as appreciated.

This image, which I will call “Mole in Space” evolved from the serendipity of the morning of moles and the first day of playing with Procreate, a draw-paint program for the iPad. The learning curve is, if anything, steeper for this program than for ArtRage, but it is zippy and advanced, and I’ll be doing good to do more than black and white sketches with it.

I’m a little bummed that I can’t make very large images with the iPad One. I’ll have to test the feasibility of shrinking to small book-sized black and white versions before I sink too much time into this idea–even though I can still successfully kill immense amounts of time just doodling in the glory of ineptitude and whimsy.

But given the possible future in which I’ll have this book (Floyd County Almanac) to illustrate, I may choose to include images, images and drawings, or none of the above. And so I justified the purchase of this app ($5) with that reasoning. (Rationalization?)

More to come on moles, since, when life gives you lemons….

3 Comments on “Mole Hills Part One”