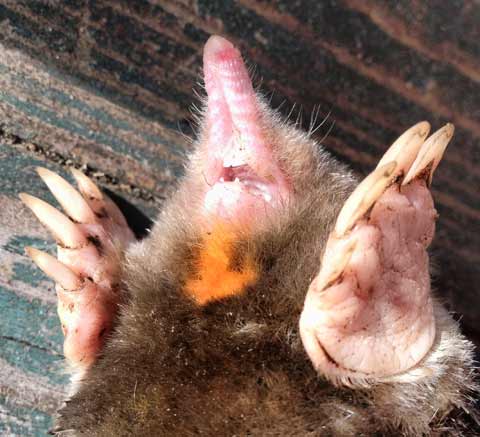 I told you that Furry Fury herself caught two large moles in quick succession the other day.

I generally try to put the unplayful carcass out of Harm’s way when they are done moving and are no longer of interest. So I picked up the first one to toss up onto the shed roof where the dermestid beetles can find it and feed their little bug bellies.

I noticed on the black velvet coat underneath was an orange splotch under the throat and a larger irregular patch of lemon yellow fur on the belly. I assumed it was peculiar and rare and a mutation in coat color of that particular mole.

The second mole came along a short while later, some 300 yards from the first. When it came time to do the Dead Mole Toss again, I found what you see in the image: the same color pattern underneath.

So I learned something I had not known: moles can come in fancy colors! Thank you, Gandy. Sorry, Mr. Mole, that learning to appreciate you required such a high price on your part, but you really, really did give the dog almost an hour of entertainment and exercise out on the driveway where we could keep an eye on her. Your sacrifice was not in vain.