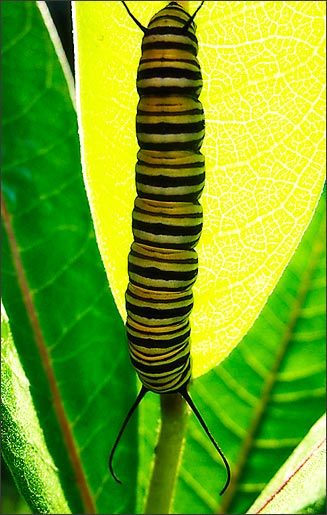 You can see how my mind works early in the morning. I pulled up yesterday’s image that I took over in the pasture of a Monarch caterpillar –feeding on a milkweed plant, of course. A title: always the first necessity (or last) when framing a post. What pops out when I look at this image? Certainly the striking pattern and form of the caterpillar are worthy of note. But it was the overall tone of the image–in citrus shades of yellow and green–that drew most of my attention. Hence, “lime” and from there, limelight. (BTW, the yellow is as-is, no touch up; a dying milkweed leaf is semitransparent, providing a compatible color contrast to the green, thank you very much, Mother Nature!)

Limelight? What kind of crazy word is that? Well, I wasn’t able to find much in the way of particulars, and I think I already knew most of this, but here’s some word power for ya: Limelight was also called calcium light. A flame was passed over the top of a cylinder of calcium which when burned gave off a brilliant white light. Such an apparatus was used on early stages and chiefly to illuminate the central character. Other lesser lights had to do for the supporting characters. Hence, there is nothing green about limelight. Except in this particular picture where one snazzy lepidopt is the center of attention.