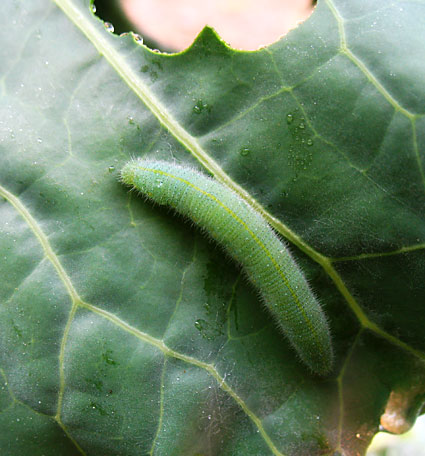 Wonderful rain overnight, more probably on its way. The pastures aren’t brown the way they’ve been the past several dry Julys, but the streams continue to fall, so I imagine the same thing is happening to the ground water from which almost all Floyd Countians get their water. We are still some 4 inches behind the “normal”–if we can still use the last 100 years to measure from anymore.

So between storms, I will go out for my morning worm picking at the broccoli patch–the large gray-green leaves holding so much moisture beaded up on their unwettable surfaces that I ought to wear a wetsuit. I’ll get drenched. I look out the window and see the fog settling down into the far end of the valley, and I’m glad we don’t live over near the parkway where the low cloud has probably settled in for the rest of the day.

As caught in the act yesterday morning, here is the culprit I’ll be seeking for digital compression (Imported Cabbage Worm). If there were only some way to make them–say–glow in the dark, or to stain them red so they weren’t so cussedly easy to overlook while stooped over, oh my back. It would also be easier, while I’m having gardener’s fantasies, if I were only two feet tall.Â  We’re off to see the wizard…