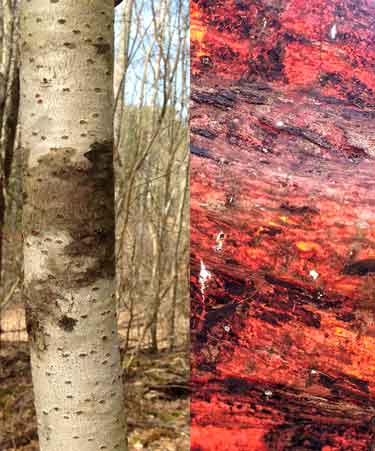 Walking upstream along Nameless Creek in the late afternoon, we were startled by a red flag tacked to a small tree maybe 50 yards ahead of us. Who would have done such a thing? An orange-red rectangle clearly was attached to what, even from that distance, was plainly a mountain ash.

As we got closer, it became clear it was not paper or cloth someone had attached to the tree. It was a segment of bark, still attached along one edge of the rectangle, the remainder held out into the slanting sun like a pinnafore.

Mountain ash are common small trees notable for their bright red berries and for their weak, short-lived trunks that fall over into our trails routinely. No where can I find anything about the bark (other than one source that comments it has a fragrant inner back. I can’t believe I didn’t snort it. I’m truly slipping in my golden years.)

The trunk (with it’s large conspicuous lenticels) is often marked by light-dark-light alternating patches. It seems that it’s the lighter patches that bear the odd orange-red pigment. (I’ll take my knife and peel off more bark in the dark sections to check this out.)

Mt. Ash is not a true ash but a member of the rose family. One source said it hybridized routinely with chokecherry, which I found odd.

The European Mountain Ash is similar, and referred to as the Rowan Tree, and prominent in old mythologies and stylized in various art from the past millennium.