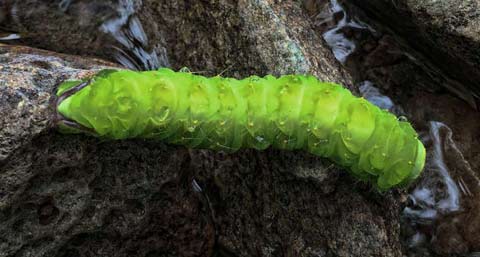 We were just able to get across the raging creek as it began to calm down after last week’s surge of Tuesday rain.Â  The morning was somber and foggy, and the world had already begun its autumn slide towards the monotone drabness of winter.

But as we stepped down in the creek bed, we were startled by such gaudy, brilliant chartreuse that it almost hurt our eyes. Add to that that this caterpillar was oddly translucent so that it appeared to emit light against the dark rocks of the streambed.

It is a Luna Moth caterpillar. I wondered if this one would pupate and become a moth before cold weather would end its short life. Or will the pupae have the good sense to hang on a branch somewhere, and if it can avoid freezing, hatch out in April when the world becomes hospitable again.