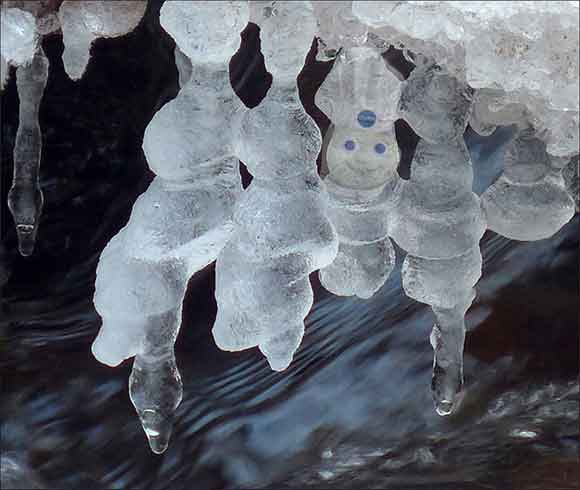 I hesitate to make this information public–mostly due to the fact that this discovery was from our peaceful, remote, blissfully-neglected creek valley on the edge of the Blue Ridge.

But the public would find out soon enough. So here it is:

Discovered: where Doughboys come from; The Nursery of The Biscuit. Air, water, earth and ultimately, fire. How elemental; how mysterious and ancient a lineage they must be from!

Frankly, the appearance of the unmistakable visage and baker’s hat only appeared once I brought the camera indoors and began to inspect the shots from that morning. Even then, until some work to enhance contrast and clarity, it would have been easy to overlook what now appears so apparent.

Beyond this–what will become of this discovery, how it will spin at the hand of its handlers back at Pillsbury, I cannot say.

I expect, now that the fact is known, busloads of reporters and film crews will descend on our quiet valley, careening down our muddy road in gawdy buses bristling with communications antennae. PortaJohns, generator-powered hookups, all the flotsam of notoriety, will overwhelm our peace.

I know this. But it would be selfish of me to keep this revelation to myself and not share it–at first with you, my fellow travelers–and then the rest of a corpulent, over-fed America of doughboys and girls. (When the first DB was revealed in 1962, this body type was somehow comical, jolly, unusual. Today–not so much. Hee-Hee!)

But with all the recurrent public appearances of DoughBoys in popular culture and media over the years, [see wikipedia]Â Â backups have and will be needed; and as it turns out, they are born on Goose Creek.