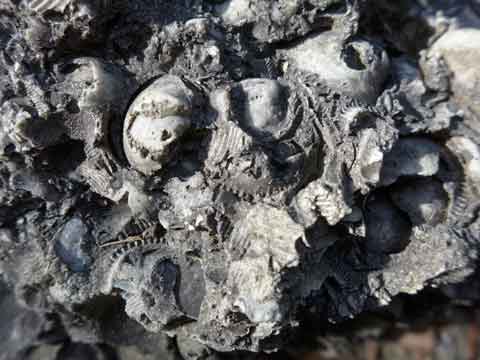 Yes, I agree: this is not a typical plant or bug or Fred’s Darn Barn picture you might have come to expect on your occasional flittering visits to Fragments.

But I post it this morning because it has been the focus of an hour’s failed attempt this morning to interpret something I’ve seen in “the field” and cannot help wanting to know more about.

This unglamorous shot was taken on one of our walks as we pushed our grand daughter’s baby in the buggy down their subdivision road in Hampstead, NC (near Wilmington). This kind of conglomerate can be seen along many driveways and landscaped areas. I also noticed it used along the interstates to stabilize road banks. It must be abundant and cheap.

After looking in several locations, I’ve reached the conclusion that this is a native “stone” rather than concrete with shells added as I briefly thought. It is quarried and crushed sea bed. I’d like to know more about its age and what fossil mollusks and other related creatures I might be able to find in it. So far I have failed to learn more about where this ancient-ocean-floor rock is mined or any more about it.

But it is more than just facts about this fossil rock that draws my attention. I think about the planet as it existed when so very much calcium was deposited in ocean sediments–along with massive amounts of carbon, as calcium carbonate–whose CO2 was drawn from the ancient atmosphere.

As the oceans rapidly become more acid (how fast is this happening?) there will be less carbonate formation in coral reefs, mollusk shells and in the countless billions of tiny shelled creatures whose progenitors go back even before the trilobites whose segmented remains reveal how old this form of carbon-calcium encasement truly is.

But that was then. The future cost of this chemical pH change in the oceans–a magnitude and rate of change unthinkable just a generation ago–is staggering. So that’s what comes to mind, ultimately, as I hold a chunk of driveway junk in my hand. I’m sure my daughter’s neighbors driving were wondering.