Off Grid on Goose Creek 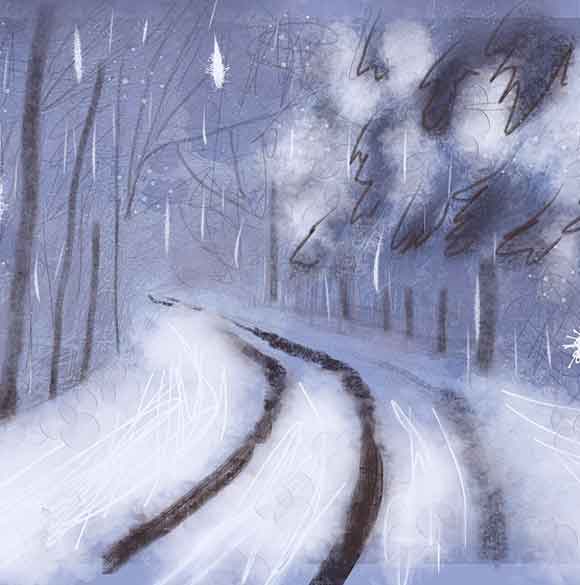 Down the road towards spring ~ artlike image by Fred
fred Posted on January 31, 2014 Posted in PhotoImage, seasons 14 Comments

Even into the third month of round-the-clock wood fires in the stove, it gets no easier to hoist yourself out of bed in the mornings to feed it. Some are harder than others. I vote for yesterday as this year’s prize winner. So far.

The prolonged very-cold does not suit the energy personality of this 140-year-old house. She treats us well into the twenties, the teens if there’s no wind. Below that, there’s no love.

Here, after weeks of below-freezing days and below-zero nights, the old gal begins to suffer hypothermia, the normal heat retention and circulation pattern diseased by tiny cracks and chinks. The stove’s continuous gasping for replacement air pulls arctic cold in faster than the throbbing heart can radiate body heat into her living spaces where we sit huddled and blue.

At four a.m. I reluctantly heaved off of me every blanket and quilt and comforter we own. I would have stayed in bed, not to sleep but to avoid morning shock. The cast-iron tyrant was unforgiving of my hibernation hopes; she demanded a feeding. Meals come close together less pipes freeze or wives whine when it is this cold for this long.

The percolator made encouraging groans. I squinted at the indoor-outdoor thermometer next to the kitchen sink (water trickling constantly for a week): minus 6 outside, 57 inside. For the next twenty minutes, my hands mindlessly did what they do to gather wood, matches, and a pine cone or two and start fires in both stoves. I can do it in my sleep. In fact, I think I did yesterday.

At last, chores done, I assumed the morning position, monitor, keyboard, mouse and microphone just so, and began brainstorming on some upcoming projects. I was really making progress when the lights went out.

I poured another cup before the percolator went cold, and aimed my flashlight towards the window: -8 now the thermometer said, the coldest so far this winter.

And long story short, it was 12 hours before the power came back on in time that we didn’t have to eat supper by candle light. But we could have. And, as often is the case with such “emergencies” we were reminded of how dependent we are on the life force of electricity and also, how in our particular situation, we can still go on without it. For a while.

Yes, we have a generator, and it’s true it has never been called to service in this kind of situation. Partly, that is because our outages ha been brief enough not to threaten the freezer contents (or cold enough outside that we have a substitute freezer), but mostly because neglected small engines do not like me and I fear rejection.

After momma-bear finally emerged, I held a match to the top of its cylindrical wick of theÂ shaded kerosene lamp I fetched from the back room. It cheered up the room considerably.

We re-heated the coffee in a pot on the gas stove, and Ann seared the meat for the 32-bean soup that would simmer on the wood stove all day.

After sun-up I hauled wood, the pile I showed you a while back now covered in goose feathers–three inches of the driest snow I think I’ve ever known. She ministered to chickens, and Gandy had a playmate come over in the afternoon, his master also without power and bored.

Water saved in milk jugs we used as labeled–for drinking or flushing–and good thing we had them stored in the basement since the creek’s water is inaccessible under a good six inches of solid ice. We’ve used a sledge hammer before but I think I remember we were younger then.

On the loveseat, the warmest place in the house, Â stove in front and the afternoon sun off my shoulder, I spent a couple of hours reading with the dog curled up against me. She and I took turns solo-dozing, and then did a duet for a half hour.

Last night, I did some serious anxt-ing over being behind from having “lost” yesterday.

But some things were found, too. Good books, warm granny quilts, hot chocolate and tea, the absent hum of the engines of home economics, and time slowed down to a crawl by an Earth now slowly tilting back towards bud and bloom, green and growing.

To everything there is a season. I, personally, would welcome the one now distantly waiting in the wings.

14 Comments on “Off Grid on Goose Creek”