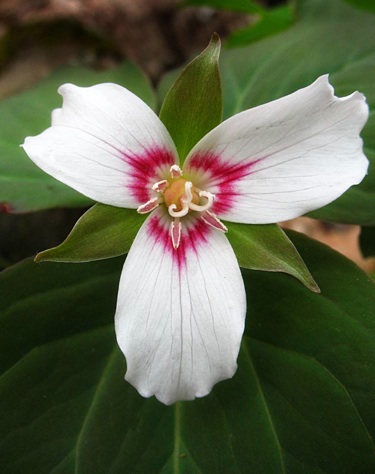 This year’s Naturalist Rally, the 34th, was both well and enthusiastically attended. The weather cooperated (I’ve gathered on Saturday morning there in years past theÂ  second weekend in May with snow on the ground.) I was able to show a friend from home my favorite and familiar walk where I used to lead field trips. The Painted Trillium image here is a memento of that afternoon.

Dr. Stephen Hopp (who I know probably tires of being thought of as Barbara Kingsolver’s husband) presented the Friday program on the “Sights of Bird Sounds”, a topic he has researched for many years. What are birds saying to each other when they call? I learned a lot, and will be coming back to some of that later on.

This year’s crowd was bulked a bit by the presence of ten or so members of the Abingdon Master Naturalist group, and here again, more about this soon.

But without a doubt, my most indelible memory of the weekend was the opportunity to stand on the other side of the podium there in the Konnarock Community Center and address the crowd of closely-kindred spirits. The program coordinator had read my pro/retrospective of the Rally from my May 2 blog post. She felt it deserved a wider audience, and asked me to read it at the Friday night program.

And while I doubted many Fragments readers or Floyd Press readers really appreciated the poignancy of the sense of both loss and celebration in that piece, I knew that this crowd would understand. They would feel what I had felt when I wrote it. And I think this was the case, and am thankful for this unexpected opportunity to share.

I’ll have a few more images for you from the trip, though the sun never really showed itself and the wind never really calmed enough for good wildflower closeups. But for one more year, I was close enough to all of it to remember.