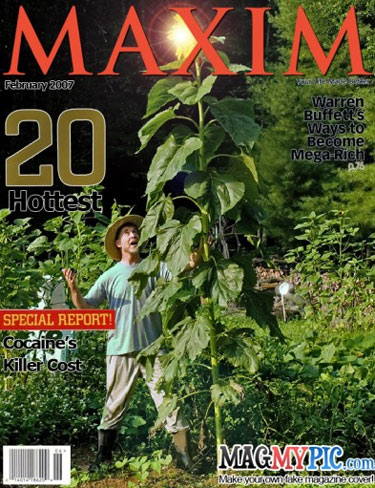 This is sort of a fun way to waste an hour: put pix of your family members on various magazine covers.

You will have to fish around to find an image composition that accidentally fits the uneditable magazine cover from the somewhat limited (but expanding) selection of magazines at MagMyPic.

More often than not, in any people pictures you have, their head will get cut off by the magazine banner, so experiment until you find something that just happens to work. Be warned: because of this inflexibility, the best shot you have of your dad will only work on the cover of Cosmopolitan or Seventeen. Might send him and the world the wrong message.

Yes, that’s me: Farmer Fred (a.k.a. The Foolish Farmer of Erewhon–an allegory from the first year of blogging.)