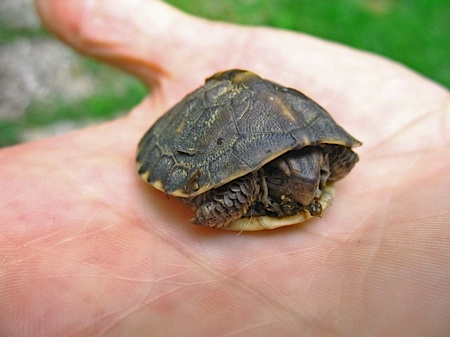 Tsuga, the Yellow Lab, was holding his mouth funny–as if he were about to say something in the way of an explanation, lips not quite together and a little guilty looking.

And out popped a spit-covered, perfectly intact inch wide new-hatched Eastern Box Turtle. I think it is the smallest I’ve ever seen.

The dog finds adult Terrapene carolina commonly and at one time in his puppyhood considered them a kind of crunchy delicacy. We scolded him and made him feel guilty of turtle mutiliation, so now he finds the full-grown turtles, he just carries them around in his gaping mouth for a while, then brings them over to us, lowers his head, and gently places them on the ground.