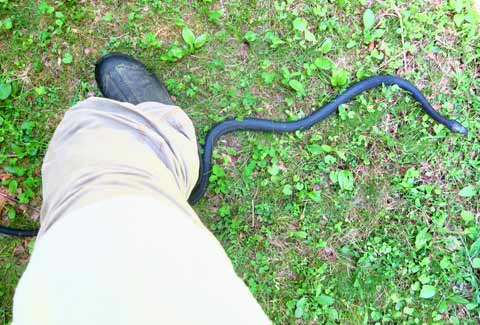 Gandy, our dog, is good to let us know when there are snakes around. She’s not particularly disturbed by them, and even goes nose to nose, every time we round the corner of the barn, with a stout brown water snake. They have an arrangement of mutual curiosity.

So yesterday the dog offered her “come look at this one!” bark, and I came up the rock steps to find this large black rat snake on the walkway out the back door. It will be easy to identify as THIS particular snake because it has some markings near its tail.

In fact, it looked like the kind of injury that might have come from the barn door tracks. This was probably the “familiar” from last summer who basked so regularly above those sliding doors the we made a point to –almost always — be sure he was not basking there before going into the barn.

The snake moved off slowly down along the branch, but it wasn’t ten minutes later the dog spotted it as it disappeared under the corner of the back porch. She could either smell it or hear it as it traveled the length of the single-step porch and came out the other side for what apparently was one of several trips around the house, just checking it out before possibly committing to stay on as a regular.

In this picture, I stood in its path near the foundation to see where it would go. I was fine with it moving between my legs but thought for a second it was going to explore up my pants leg, and I tried to think how I should handle that experience.

Ann went out later to work in her flower bed and met our new tenant. I have a notion he will become one of the Summer of 2015 Goose Creek familiars, or Particulars as I call those creatures we know by virtue of their irregular relations with us–our neighbors and members of our community.

I’ll have more to say about that before long.

[Check out the Snakes in a Tree link below!}