↓ Skip to Main Content
Home › Environment › nature › Passing Fancies: Where are the Monarchs?

Passing Fancies: Where are the Monarchs?

All last month as I drove the back roads of Floyd County or walked along our pasture road, I had my eye out for the first monarch of the year, but saw not a one. Now it is October, and I was about to think this would be the first year in my adult life not to see them pass down the long ridges of the southern Appalachians in autumn. They have been under some pressure throughout their range and are in danger as a species. It was sad to think that during what remains of my lifetime, the world might lose yet another familiar creature from its shrinking menagerie.

Then yesterday, a pair of wings sailed quickly by while I was raking the driveway–wings the very color of the orange maple leaves underfoot. I wasn’t sure at first, but then the wings settled for a moment on the chrysanthemums near the back door. Yes–this was my first Monarch of the year, at last. While the swallowtails by this time of year were tattered and pale, this butterfly had obviously hatched close by, a new floor model, low mileage, spotless and sleek and full of pep.

This was a male, told by the spot and thinner veins on the wings, and he was full of himself, expending more energy than was wise for one who still had an enormously long late 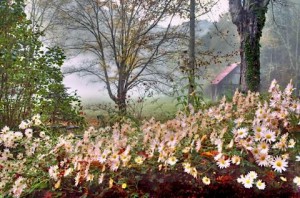 autumn voyage ahead. It was skittish and flitty as I approached with my camera for a portrait. I moved in close for a tight shot. But just when I touched the shutter, off he flap-flap-flaped in a large erratic circle, flying as far as the barn across the creek. He is out earning his learner’s permit on new wings and may be about to leave the neighborhood for good, I thought. But over and over he always came back to the big cluster of pale orange mums. The flowers, opened for only a day, were as pristine and unblemished as this brand new butterfly.

I confess that I had never really noted the very different pattern of flight the monarch displays compared to the spicebush swallowtails and fritillaries that have been so common around here all summer. The Monarch pattern is very definitely flap-flap-G L I D E. And this passive gliding makes sense when you consider that a butterfly born on the East Coast is destined to winter more than two thousand miles to the southwest.

If the monarch did not know how to glide on the supportive and propulsive air, it would never be capable of its winter vacation (and death) in central Mexico each year. If it could not glide, it would not be able to rise in the thermals and coast effortlessly for miles, heading south and west. Watching this butterfly soar, I remembered that I once knew how to fold a piece of wide-ruled school paper to make a glider airplane that would have amazing hang-time, almost floating on the air. It is that bit of aerodynamics that the monarch knows.

Like an eagle, no heavier than a feather-down, it knows how to adjust its wings and modify its flight path to air currents over vast distances with little effort by gliding and soaring on the thermals. Like a warbler, the monarch knows how to orient to the invisible pull of unknown energies or to landmarks in the sky, or on or under earth.

It knows how to migrate over unfamiliar thousands of miles to a place it has never been before. Monarchs know how to feed on the sticky sap of milkweed that makes them unsavory food for would-be predators, insuring that at least a relative few survive long enough to sail away to the West to take a long nap with hundreds of thousands of their kind. All of this they somehow know.

What they know about buoyancy and loft, about milkweed toxins and about the geography of the continent is hardwired, ordained, immutable and the same from one butterfly to its offspring–truth unchanging through an infinite procession of a thousand generations.

A monarch, with its tiny speck of brain simply knows that it knows what it knows and that is enough. These orange and black wisps of will know where they’re going and how to get there, born with Heaven in their wiring and their wings.

3 Comments on “Passing Fancies: Where are the Monarchs?”