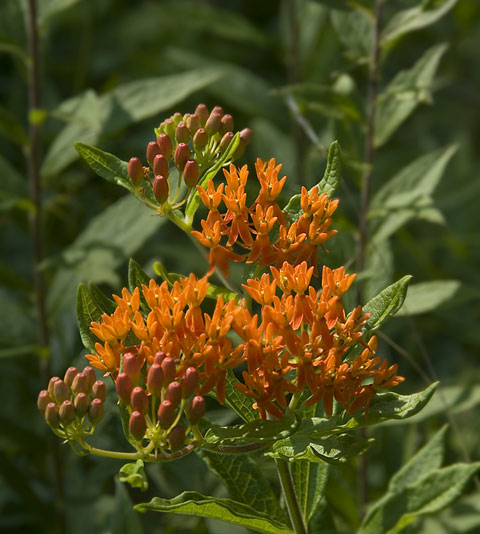 How does one say (other than by dividing the 120 days from the official start to the official end of the season) when we have reached and passed the mid-point of summer? (That numerical midpoint would fall on about August 5.)

Our wildflowers move through the blooming of their lives, the hands on that grand clock that measures the passing of time in larger chunks than minutes and hours.

The Joe Pye Weed is half its full seven feet height and its flowers have barely opened.

The round sweet-scented ball of flowers of the common milkweed (Asclepias syriaca) are turning brown, the spiny pods are just beginning to grow the silky “kapok” threads that will loft its seeds into the polar wind of an October day. (Read more about this interesting group of plants.)

The corn ears (for those whose gardens fortunate enough to have survived the deer, Japanese beetles and summer storm blow-down) is starting to show brown tassles. It won’t be long now.

The fireflies flash in twos and threes, not by the hundreds now. And the night insects reach their crescendo during the warm nights of late July.

The orb weavers have begun to drape their sticky strands across the forest path we walk every day, and the red-spotted “efts” we saw on the trail earlier in the year have grown up, lost their orange glow, and returned to the watery part of their lives.

(The milkweed–Asclepias tuberosa–pictured here is common along the Blue Ridge Parkway just now.)

3 Comments on “Peak of Summer”