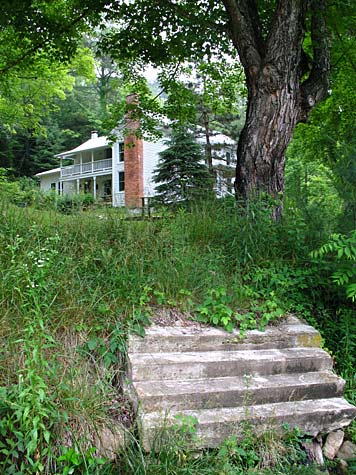 From the pasture, looking back across the ribbon of creek below the road to the house, is an odd monument: steps to nowhere.Unless I tell it, stories will be made up centuries hence as to what the original purpose of those steps was, way back in those primative times at the turn of the last millenium. The house will be gone; the concrete steps tipping into Goose Creek will persist, though they too will ultimately vanish, grit and grain at a time, eroding their way as all things finally do, to the ocean sediments. Ashes to ashes, concrete to dust.

It’s not that much of a tale really, but it is true, a solid fact, so better than the lore that might grow to say that this aggregate of rock and concrete washed downstream in a flood, or perhaps there was a great explosion that hurled the steps from higher up the bank from that flat place where it looks as if there might have, at one time, have been a house. In fact, that seems certain. Someone with a metal detector many, many years ago found an embossed metal placard on that knoll that clearly stated “Here’s Home”.

Well, there was a time it was not our home. Yet. We had begun to make it so, but eight years ago today, in June of 1999, the work had only just begun. One of the first things that needed doing was to remove the broken-down front porch that was not the original. It had been rather poorly constructed since the house was built, and it covered the entire southern face of the house. The approach to the old porch was this solid mass of concrete, four steps fixed in a form. My suspicion is that this was a federal assistance work, since we had similar replacement steps installed at the first house we owned, and whatever federal agency held part of the mortgage wanted to update their investments with such things as PERMANENT entry steps.

But they had to go. So before I left for work, I was talking with the backhoe boys about what was to be done with the mass of artificial stone. They had brought a jackhammer for the purpose and planned to break up the chunk of rock, and would need to put the rubble somewhere.

“Might go down along the creek below that maple where the stream is cutting into the bank. I want to protect that tree; it’s part of our air-conditioning” I told them.

When I returned home that afternoon, I was mortified to find that they had been able to get the whole lump into the bucket of the backhoe, and yup, they put it right where I wanted those busted-up chunks of rock to go. And there they sit to this day.

However, Goose Creek pulls away the ground from under the old steps as the level of the stream bed falls. At first, in their new place overlooking the creek, the surface of the steps was horizontal. I used to sit on them in the shade of the maple and watch the minnows play in the creek below. Now, they’re pitched steeply toward the water, gravity being a patient force, pulling every mass inexorably toward the center of the earth.

One day, maybe in our lifetimes, after a summer hurricane, the whole five ton lump of rock will tumble upside-down into the creek. The smart thing then would be to have the same guys come with the same jack hammer and bust up the intact mass and push the pieces back into the creek bank. But you know, I’d almost be tempted to leave the thing intact. Think of the creative stories it would inspire!