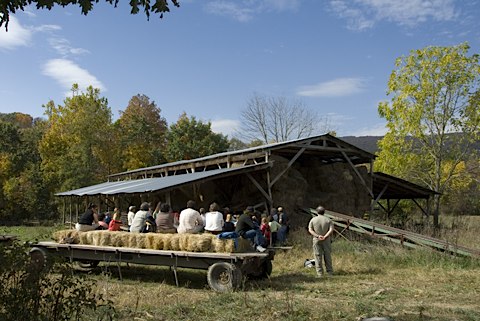 None its “many faces” are very showy. As a matter of fact, from the ground or the air, nothing seems all that different about this plateaued 550 acres of Central Virginia valley farmland near the community of Middlebrook.

To the casual observer, it may seem just so much pasture and woods and soil and the occasional outbuilding. But Polyface Farm represents an innovative “foodshed” (think watershed) from which food products flow, grown from the ground up–which seems only reasonable for a farm, after all–from earthworms to pastured chickens and rabbits and cattle, as if the earth really mattered.

Every element of the process holds an elevated status there. Soil is more than just dirt there, and as Joel Salatin says, his farm honors the “pigness of the pig.”

Speaking of which, the Salatins have recently found a more efficient way to use their land to the benefits of his pigs. At 200# the pigs are moved into forest, once the usual venue of pig fattening–in times distant past, feeding on chestnuts. His pigs gain the last 100# on acorns.

Three acres of woodlands (otherwise of low and long-term-only value beyond firewood and a crop of timber every 40 years) takes the place of an acre of pasture for fattening purposes and requires no input of fossil fuels to fertilize, mow or spray for weeds.

As an added benefit of this innovation that allows more pork for fewer dollars and a lower overall carbon footprint, acorn-fed pork tastes noticably better and hence, is in demand. 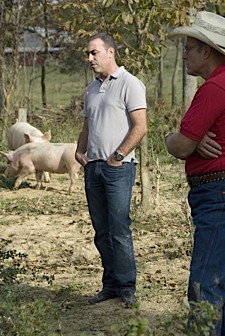 Here Phil Petrilli, Northeast Regional Operations Director for Chipotle, an 800-restaurant chain, stands inside one temporary pig lot at Polyface and explains to SEJ vistors why this relationship for organically raised pork is working for his company.

Everybody wins. Chipotle takes the less desirable cuts–hams and shoulders–while the white tablecloth restaurants want the tenderloins and chops. All the offal is processed on site, and one sign of the business at Polyface having grown too large will be when it cannot compost its own waste.

Saladin spoke at length from the hay shed (top image), a location where he said Michael Pollan had his “epiphany” of the rightness of the Polyface way of doing things with a long-view of food production, rejecting the “faster, fatter, quicker, cheaper” approach that has been the US model.

One consequence of this approach has been the rise in e. coli contamination of the meat supply. As Joel describes it, this is because when beef are grain-fed (instead of pasture fed–and don’t get him started on feeding grain to animals when people are malnourished and dying of starvation) the pH of their rumen (stomach) changes so that acid-intolerant bacteria (like e.coli) survive and end up in fecal material that ends up in slaughter houses that ends up in the meat we eat.