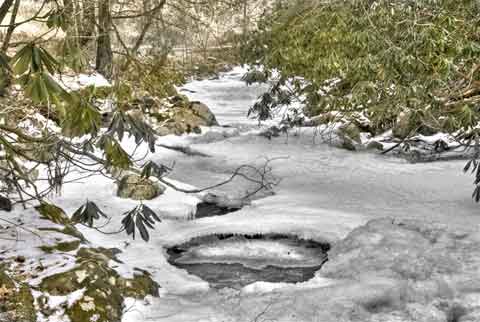 …A seriousness settles upon us by mid-November, mornings not light enough to cross the creek to tend the cussed birds until after seven. The board-bridge across Goose Creek is treacherous, enameled with a coating of ice droplets, tossed up by the riffles we will hear from the porch. Soon they will go muffled by ice so thick it will hold our weight. Mostly.

Mornings now, my chores include making sure I head out to Ann’s car fifteen minutes before her departure at 5:45, gloved and garbed in my sweats, white bathrobe cinched tight around me, scarf or two around my neck, and my Elmer Fudd hat strapped under my chin. I crank up her little green Subaru. It will defrost while I sputter and slip and scrape and finally free enough window space for the slow road to the hard top, east or west, depending on the latest road condition info from VDOT511. That decision is also a part of my winter-morning meteorological duties.

The general rule is that, after the first significant snow or ice storm, we avoid the shortest distance to town or for Ann, to work. That route requires negotiating a northy five-hundred-foot climb out of here to Daniels Run, crossing frozen seeps in a dozen places where springs constantly empty across the camber of the single-lane road perched high above the cleft of the creek. There was one notorious hundred-foot section we called the Blue Ice Dome of Death until VDOT temporarily patched it.

Frozen and pitched and in the dark is not a good way to start a trip anywhere. So we just count on a little more time to get where we’re going for three or four months. It’s part of the rhythm of things here, the price we pay for living off the beaten path, and there’s no point grousing about it.

2 Comments on “Prelude to Winter”