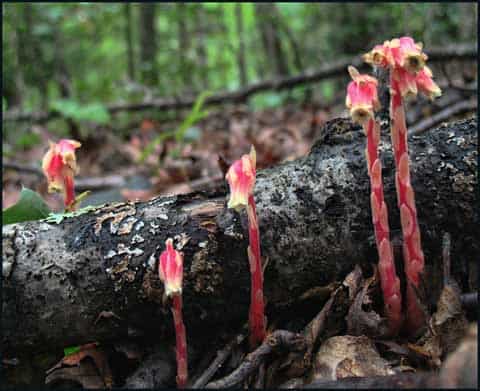 As good fortune would have it, we have been taking our vehicles to a repair shop on the Parkway. (If you saw the place you’d realize what a wrong image that phrase conjures up; it is more in appearance like an upper-class health spa for engined appliances. I would much sooner eat of that floor than our kitchen counters.) But be that as it may…

The place is situated in diverse forest on level land just off the BLue Ridge Parkway, and just over the line into Patrick County. On my first visit there a few months back, the adjacent forest was covered in mushrooms.

So when I was scheduled to take Ann’s Subaru there last week, I made sure to take my cameras (and a couple of plastic bags for collecting if any edibles were found.)

There were fewer fungi than I had hoped. But I did find these relatives of the much more common Indian Pipe. These are called Sweet Pinesap, that a forest service website describes as “a rare, herbaceous perennial wildflower with a geographic distribution in the southeastern United States. It occurs more often in North Carolina and Virginia and rarer in the remaining states.”

It is said to have a “strong odor of violets.” Dummy. I made no attempt to snort this plant. I’m losing it. My nose usually immediately follows what my eyes see and my hand holds.

I was glad I went on such a routine chore with the expectation of discovery, and that happening upon such lovely if insignificant fellow creatures can give me such a boost. Weird that way, I guess.

5 thoughts on “Prepared for Discovery”