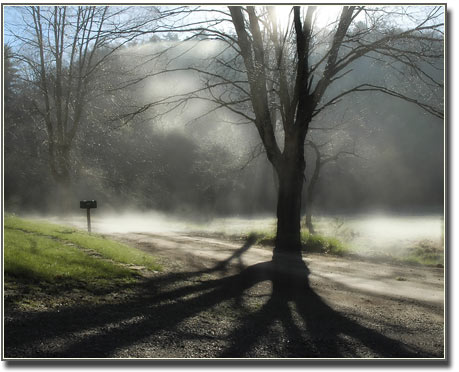 â–¶Â It may soon be lawful to throw that elk carcass across the hood of your pickeEmup truck (if the wheel wells are not too bad bent) and take that sucker home to mamma.

But wait, opponents to the Montana road-kill proposal say–Won’t that just make hunters add their Dodge Ram to their list of weapons?

I say if that’s the case, let’em go to the next world with a gun rack behind ’em and a thousand pounds of venison across their windshield. They couldn’t go to their reward any happier, and so much for the drive–so to speak–of those NRA genesÂ supersededÂ in the end by a pair of BigMan trucksticles. [Hat tip to my friend R for the terminology. Blame him.]

â–¶ In other late-breaking news, we are boiling down the two gallons of maple sap we tapped from the tree you see in the picture here. [Find a larger and different view of that maple here–an image, by the way, that lives as a 24 x 36 inch enlargement in the Floyd Writers Room at Hotel Floyd.]

Two gallons in one afternoon in the 40s. That was nice. It’s 12 degrees just now, never made it above freezing at all yesterday, so not an additional drop of maple sap. So we’re calling this our harvest.

The pot is hissing on the stove, which the heat of which fortunately, in a perverse blessing, we really NEED this March, where last year, it was in the 80s.

[Global warming debunked, then? Well, no. The persistent “blocking high” over Greenland is what is sending polar air via the jet stream dipping dipper and for longer south than usual. And this blocking high is a product of extreme warming over the northern latitudes.]

Where was I? Oh yeah: The next step has something to do with boiling precisely at 7 degrees above the local boiling point of water to render the concentrated sap into syrup.

We’re hoping for maybe 6 ounces and enough for a pancake supper that includes smoked, thick-sliced bacon from the half-a-local-pig in our freezer.