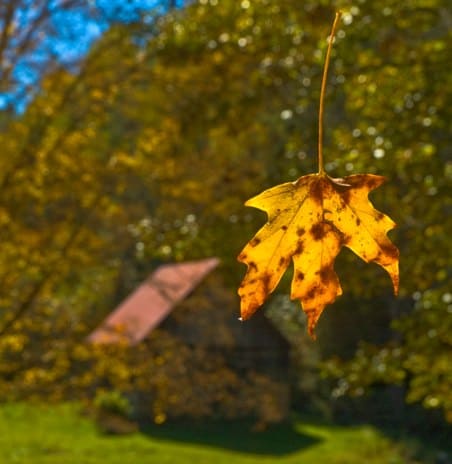 Here’s a snippet from an except from a portion of the slowly-growing Floyd County Almanac–the part that follows the month of September, this from the latter portion of the month, and the first of three consecutive bits of that passage, to be added to this week. It deals with the real challenge to the non-human part of the living world when the thermostat falls. For humans, meh. Not so big a deal, and maybe that’s modern humanity’s loss.

Though a few poetic souls and tree-hugging types like me will make small noises about the magic of the coming of fall, for most of my fellow humans, from a practical, survival point of view, autumn really connotes not much more inconvenience than putting on warmer slippers of a morning. Homo has found divers ways to sidestep the potential loss of body heat when the planet in our half of the world tips away from the heat source for six months. The evolution of those evasive measures (called food, clothing and shelter) has resulted in the existence of human survival mechanisms available to some for winter-focused consumption, called grocery stores, mail-order clothing catalogues and residential heating and cooling professionals–none of which are readily available to your local squirrel.

We simply turn up the thermostat if the winds howl and chill factors slip towards zero, supplementing our body heat with fossilized sunlight in propane or coal. We reach for the afghan granny made when we were born and toss it over our shoulders while we type, all the while drinking steaming hot cocoa that warms us, bellies outward. Rather than adapt our physiology like most animals must do, we remake the world to suit our frail mostly-hairless hides.

Except for complaining, humans mostly ignore the coming of colder, shorter days, while every other northern hemisphere living species–every single one, plant, animal and other–will only still be around from fall to the next spring and from one eon to the next if it has learned its own survival tricks against the challenges that cold brings….

4 Comments on “September Part One”