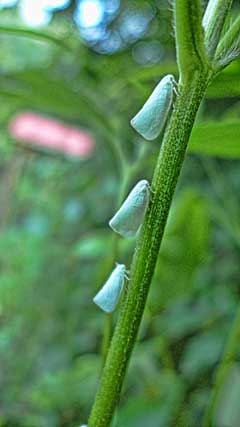 Some leafhoppers look for all the world like thorns on the side of a twig. Some are remarkably colorful or bizarrely shaped–if you take the time to look very closely. (In this image, the splash of color is the garden shed roof in the distance.)

These three were conspicuous, all lined up in a row on a ragweed stem, I think, up above the garden. But when I attempted to take a picture, they got shy. All of them in unison moved to the opposite side of the stem.

I tried several times with the same result, until I realized I could zoom and avoid getting so close that they hid from me.

It was only later I learned that one name for some leafhoppers is “sharp shooters.” I like it. Like snipers hiding behind trees, they position themselves so they are protected from a would-be threat by the stem or branch they are perched on.

Another feature of these creatures (give a look at the google images page) is their odd, thickened front end. That snout contains their ciborium—a massive and powerful sucking pump with which they feed. And very efficiently, I might add:

“The diet of the majority of sharpshooters consists exclusively of nutrient-poor xylem fluid from a great variety of plant species (Andersen et al. 1989). This fluid is comprised of over 95% water with small amounts of organic and inorganic molecules. Amino acids such as glutamine, arginine and asparagine, as well as organic acids such as citric, malic and oxalic acids are often present but occur in concentrations that are magnitudes lower than the nutrients found in other plant tissues.

Because xylem fluid is under a negative pressure, leafhoppers must extract it with a cibarium pump (sucking apparatus) that is powered by large dilator muscles that have their origins in the bulging front region of the head.”

“To successfully develop and reproduce by feeding solely on nutritionally poor xylem fluid, sharpshooters have high consumption rates coupled with an efficient digestive tract that features a re-circulating loop called a filter chamber. They are extremely efficient at assimilating what they have ingested and their waste is 99% water with small amounts of ammonia.

Sharpshooters have been recorded to consume, process, and excrete 17 ml per day (Tipping unpublished data). That is the equivalent of a person drinking nearly 400 gallons of water! The filter chamber allows for greater efficiency in absorbing nutrients from the dilute xylem fluid.” [link]

2 thoughts on “Sharpshooters In our Woods”