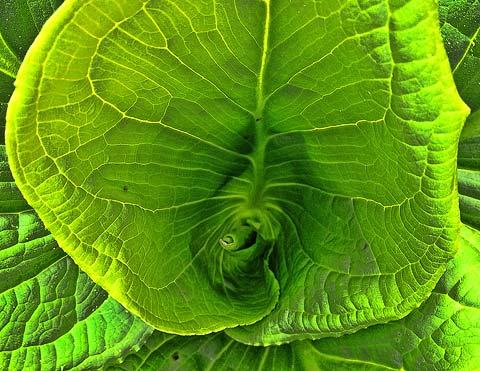 I confess I don’t always follow my own advice. “Scratch and sniff” is a standing rule when exploring new plant discoveries (not recommended so much for animal discoveries.)

And particularly when the known name of the plant suggests an olfactory feature, to have lived this many years knowing Skunk Cabbage and only this year to have scratched and sniffed–why, I don’t know what has become of me. Please don’t tell my children. I am so ashamed.

Yes, they stink. The species name “foetidus” is well-deserved. But early in the season of green, even this off-smell is a welcome change from the monochrome aromasphere of winter.

Here is a stinky plant whose “flowers” are at mud level and not at all showy (though there are some western skunk cabbages called “swamp lanterns” for their flashing yellow “peace lily” looking flower parts) . For pollinators, think: flies hunting carrion. More, here.

Look at some of the forms of this plants early leaves and flowers–the latter very like a close relative: Jack in the Pulpit, also in the Arum family (Araceae).

This plant grows abundantly, adjacent to the EcoVillage where we took a short (and largely flower-free) hike on Saturday. It is in an area identified on their campus map as “wetlands” and this plant is a wetlands indicator. But with the road building and other changes there, I predict the skunk cabbage will disappear in a few years as drainage has taken most of the previous moisture and channeled it elsewhere .

Probably the most unique feature of this plant is its ability to create heat–a process called thermogenesis. And here’s another thing I’ve never done: to stick a finger into the hooded flower in February. Expect temperatures that may be more than 30 degrees F warmer than the air–such that this plant can melt its way through frozen ground to flower before anything else.

The extra heat also helps get the smelly message out to early pollinators.

CLICK the image or this link for a Skunk Cabbage glamour shot. They make a great photographic study in light.