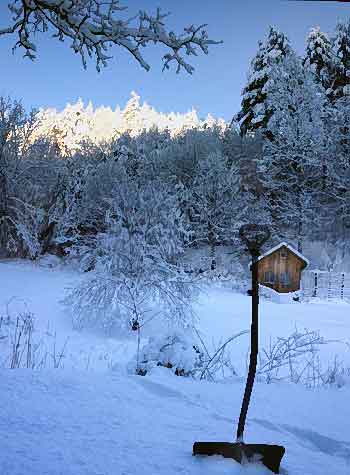 Believe me, it was no fairy tale. Beautiful, I suppose, but my sense of aesthetics after last week’s significant snow was overshadowed by a brooding sense of dread.Â Â

I had calculated “no problem” with my scheduled Thursday meeting in Salem that would have me home by just after noon. The snow shouldn’t start until at least two, I told an overly-anxious wife, headed of to work knowing she’d be spending the night sleeping in an out-patient room and maybe not home for several days because of the predicted snow.Â Â

It started around two as sleet and ice pellets falling perfectly vertical. It continued all night, piling up close to a foot in places. We (I should say I, since it was just me. And Gandy) lost power at 8 pm that evening. Not so bad. Close enough to bedtime that I threw some wood on the stove and piled under the covers. I’d do my best to NOT get up when the internal alarm went off at 4 a.m. One can only read for so long by candle light; I’d have more of that, come evening.Â

The most fun was Friday night when our (new) neighbor called to say “Fred, I don’t want to alarm you but from our house, it looks like your roof is on fire.”Â

It alarmed me. I rushed out to discover to my horror a dazzling white-hot fire in the woods not 100 feet from the back of the house. I rushed back to call 911 before I realized it was in the power line clearing. Spark! Sizzle! Smoke, steam, flash and freak me out!Â

Long story short, after being told the broken sizzling line would stay just as it was until Tuesday, I raised enough noise (calling from the cell from down the road) that repairs were expedited, and power returned Saturday just at dark.Â

We did get the generator cranked, and ran it for about three ear-splitting hours to re-freeze the half a pig we have yet in our little freezer. So no great disasters here, just enough concern so that this snow was not as lovely as it might have been, beauty being in the eye of a beholder prepared to notice.

I have only this one shot above [click to enlarge] I looked up and was smitten by the brilliance of the sun just hitting the ridge behind the house. I had just spent 45 minutes work shoveling out the chicken pen. Had to take the gate off the pins to get inside, so much snow it wouldn’t swing. We do this for two chickens?Â

Well, no, now only one. The black one was sitting pretty as you please at the front of the nesting perch, dead as a post.

3 thoughts on “Snow White, Your Castle Is On Fire”