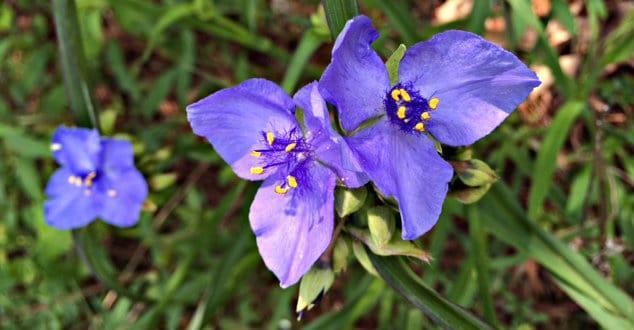 We took a stroll from our host’s house in Spanish Fort (where the whole community has sidewalks on both sides of the street!) and found this familiar but not recently-seen volunteer wildflower in abundance.

And here’s the problem at 12 years into blogging one’s life several times weekly: I’ve focused on this plant before. So I will borrow from myself, with permission, and offer these interesting details (again) about a plant you are likely to find along trails and woods margins near you:

[su_quote]In 1974 it was discovered that the stamen hairs of this plant are very sensitive to both radiation and chemical pollution. These filaments consist of single cells that reproduce rapidly to create the long blue threads of the male flower parts. When exposed to ionizing radiation or a variety of chemicals, the cells mutate and change color to pink. This has been used most widely in Japan to detect both where and when air-borne radiation has spread from nuclear plants. Blue is good, pink is bad. From the sampling I’ve seen, I think we’re safe in Floyd County for now.[/su_quote]

This wildflower cameo appearance was part of a longer piece on summer bloomery that became a “Road Less Traveled” column in the Floyd Press in 2010 entitled Summer’s Flood of Green.”