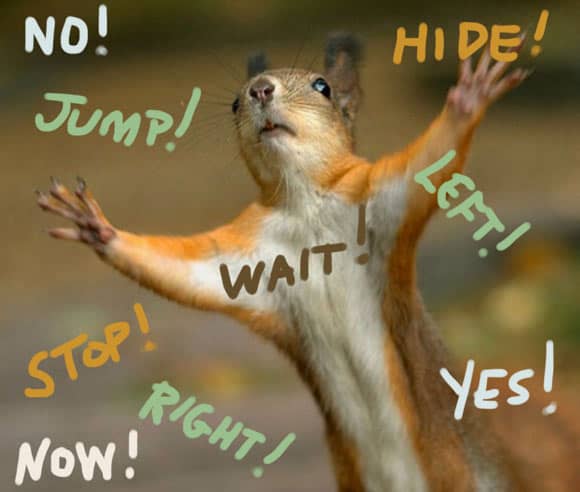 This will be no revelation to you, I know, that squirrels have a hard time making up their minds under stress.

So when I round a bend at 40 miles and hourÂ and meet one straddling the white line of indecision in the middle of the road, I no longer slam on the brakes or throw the steering wheel wildly left or right. There’s really no point.

It is certain that this ambivalent rodent, like all his kin I’ve encounter over the driving decades, is going to be of two minds, plagued with self-doubt and second-guessing himself a dozen times in the split-second it would take me to avoid squirrel pizza. 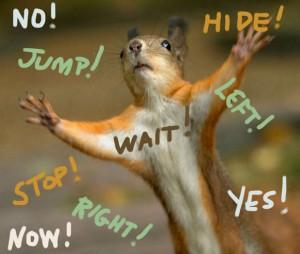 The animal’s ultimate decision more often leads to misses than to hits, so his odds are better than 50-50. So I’ll be darned if I’m going to end up in a ditch because the of the rodent’s fickle panic. I do always check the rear-view mirror to confirm a miss–unless the tell-tale thump of the wheel tells me sadly otherwise.

And asphalt is not the only situation where these creatures manifest a clear lack of cool-headedness.

More than this shortcoming, while we’re rehearsing the limited behavioral package of your typical garden-variety squirrel, they don’t seem to have a very good idea of the capabilities of those other creatures that would have them for lunch. They seem to think that dogs, for instance, can climb trees or take wing.

Gandy’s excited barking and neck-craning told me she had treed one in a little grove of 40-foot poplars outside the back door. After searching for a bit, I saw it well toward the top of one of them. But it was not content to sit from a safe spot and scold, as a rare wise elder might do.

It jumped from tree to tree in terror, knowing full well that the barking thing down below would, any minute, either fly or climb to within chomping distance. And so it jumped again, and missed.

I watched in slow motion as it plummeted straight down from 35 feet. You could almost see the dog doing the trigonometry. She closed in on its ultimate landing place in perfect timing to the squirrel’s rate of fall.

Frankly the animal’s helpless tumble was a bit terrifying to watch really, complete with a belly rush, the ill-fated animal in free-fall towards a deep remnant of snow where it would be briefly embedded as the dog took it out for a play date.

But no. Not more than four feet from the ground, it somehow clutched a wispy pine bough that bent almost to the ground with the animal’s weight and momentum. It quickly scampered up the nearest poplar and out of harm’s way. Tragedy averted. Play date cancelled.

So somewhere in all this must be a moral, or at least a descriptive phrase: squirrel-brained. Don’t be that.