fred Posted on May 26, 2015 Posted in education, nature, PhotoImage 2 Comments 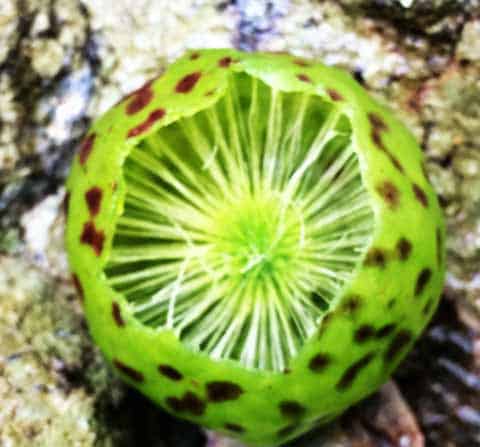 There was a time when I would have posted this as a “nature puzzler” and opened it up to blog-reader ID or best-guesses.

There aren’t enough folks around anymore to make that any fun, so I’ll just tell you what one or two of you already know: this is the gall produced by a gall wasp. It is called an oak gall (for its usual host tree species it grows on) or an apple gall (for its vague similarity to that fruit.)

These are typically more often found later in the year after the new adult wasp has burrowed its way out of its temporary housing (and live-in dinner) and the dry brown and mostly-empty husk of it has fallen from the tree to be found on the ground below.

There are other gall wasps than the species responsible for apple galls, and each produces its characteristic plant response–its signature gall. How? I have not read anywhere that this is known with certainty. Does the plant respond in these unique ways due to chemical, mechanical or viral stimuli?

This wikipedia page has a number of wasp-gall images. This bears clicking through. Perhaps the most interesting (and one I have NOT seen) is Neuroterus quercusbaccarum sexual generation gall. Anybody seen such a thing?

More reading on galls at Fragments:

Of All the Gall Part One; Part Two; Part Three

2 Comments on “Strange Fruits: Apple Galls and Their Kin”