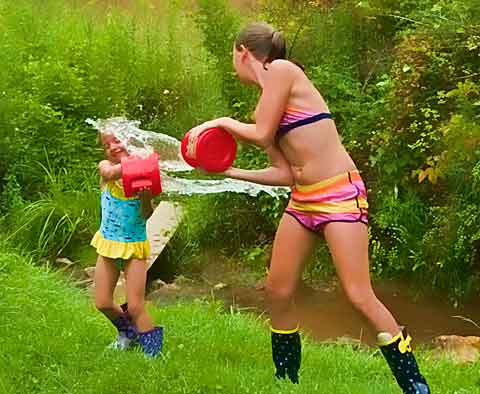 Yes, we have the slush left from six inches of a late March snow storm, and it’s been as cold as a witches…well it’s been colder than usual for this time of year. And everybody I know is complaining about the cold.

I like winter less than I used to back during my immortal-invincible youth, but make no doubt I like summer heat even less. I don’t sweat and we use only trees for our AC.

But what’s harder to take than heat alone is the humid heat I knew so well working outdoor jobs in the Alabama summer. It has felt more and more like ‘bama a even in Floyd County’s coldest spot (as I claim it anyway). Last summer, July on Goose Creek felt like July in Dixie.Where is mah glassa sweet tea, deah?

And the future bodes ill for HHH phobes like me. But if you don’t “believe in” climate chaos and say “bring it on!” to heat, haze and humidity, the trends in this global “hoax” called climate change promise increasing humidities along with the heat. And you’re gonna love it.

Seriously. I think I have some degree of anhidrosis–the inability to sweat. It shows up most when I play (or once played) sports like tennis or racquetball. My opponent’s shirt would be dark-wet with sweat.

Me: not a drop. But my face looked like something you’d see on X-Files or Fringe, as if I were about to experience spontaneous human combustion or sudden liquifaction and become an uncomely puddle of protoplasm. And even if I was winning, I’d throw the game half-way through to avoid this certain outcome.

So when I whine about the HHH come mid-July, yes I’m a heat sissy, but I also panic thinking I just might melt like the WWW.Â