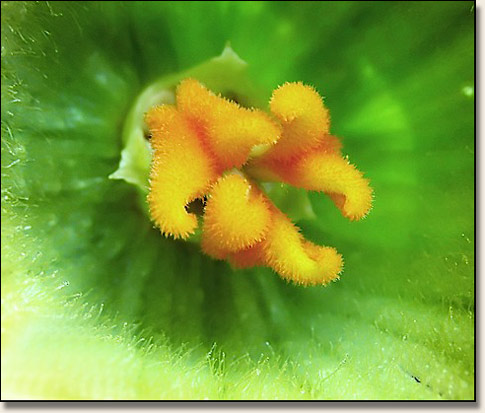 Another not-fav veggie besides broccoli that is now taking over what little garden space we have inside the “compound” is the trailing vines of the aforementioned butternut squash. Too little bang for the buck, as far as I’m concerned, a single vine requires far more garden square-footage for a pound of produce compared to just about anything else of a more vertical persuasion–like corn or even beans.

But the hard Caucasian-colored goard-shaped lumps are highly prized by one of the gardeners who Must Be Obeyed. They make great tasteless custard for making pies, She says. Just add cinnamon and it tastes like, er, cinnamon!

Far as I’m concerned, the only redeeming quality of this plant is the large, fluted photogenic flowers, seen here at a bug’s-eye view. Click image for a larger version that gives a different flower, different view.

I may print this one up and follow through with my pledge to start getting some of my shots framed and on the wall, maybe even to some local galleries. Nah. I’ll just talk about it.