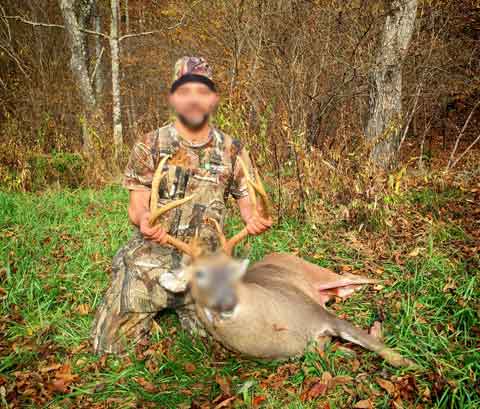 You’ll note that I have protected the anonymity of the hunter as well as taking the precautionary measure of doing the same to the deer, so as to avoid any legal actions by relatives of the deceased.

I can count on the fingers of one hand then number of times we’ve been surprised by another human voice on our trails. Then, generally, it’s a predictable neighbor who has a long tradition of using the “New Road” down from his end of Goose Creek Gorge to access Goose Creek Run for the next leg of his hike with his apprentices and friends from his goat farm up top.

So on Saturday afternoon when I hushed Ann suddenly to listen to what I would swear was someone talking, the inner alarms when up–the intruder response, I guess–and so I was not terribly welcoming when a stranger came towards us, dressed in camouflage. The dogs didn’t even bark at him, worthless watchdogs that don’t watch.

He began telling us why he was on our land. He owns the adjacent parcel and was in his deer stand with his black powder muzzle loader when he shot a large buck. Even though the shot most likely pierced the heart, the animal had not gone down. This fella had eventually found and followed the blood trail, and the eight-pointer had suffered what was a longer death than a hunter would want for their prey.

Then he faced a real quandry: the animal had covered so much distance he didn’t know how he would get the 150 pound animal back up the mountain to his vehicle. He apologized repeatedly for his trespass, torn between honoring boundaries and following through with the responsible duties to retrieve, clean and dress a lot of venison on a warm November afternoon.

“Say, I think you’re the one who almost shot me from a tree stand a few years back” I told the man, who identified himself, and I knew I was right.

“I was thinking about that earlier today” he said, “remembering how bad that scared me. It’s the only time I ever had a man’s head in my sights. I heard something coming over the ridge and was ready for a deer–but not a man!”

We’d had some words, and he wanted me to know that, if he seemed hostile it was only that he’d been scared considerably by what might have happened if he’d been, like some hunters, prone to shoot at anything that moves there just before dark.

Long story short, while he drug the carcass down to the edge of the pasture, I went for my truck. The two of us could barely lift the creature into the bed. His deer stand was 150 higher and at least a quarter mile from us. He’d need to get to his mom’s house where his truck was parked to hike back to pick up his gear, then truck the deer to the butcher in Pilot.

So we had a conversation on the way, and I got to drive into a very secluded spot I’d often seen on Google Earth some 6 miles by car from where we loaded the deer. I got to meet some of the hunter’s family and extend the range of my rambles across these mountains.

And it was good to clear the air from that incident ten years ago where adrenalin did way too much of the talking. He gave the meat to a friend in need. And we both got a new neighbor in the bargain.

1 thought on “The Buck Stops Here”