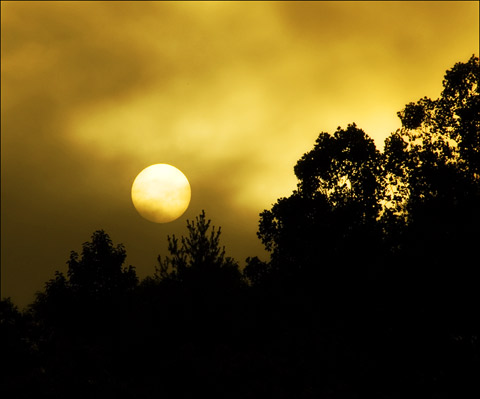 Our sun is 93 million miles away. It’s energy output is 386 billion billion megawatts per second; earth receives only the tiniest fraction of that total. Light traveling at, well, the speed of light reaches us in about 8 minutes, though it would take us 176 years to drive there at 60 mph. It is 4.5 billion years old and 900,000 miles across. It is 10 million degrees K at its center and 300,000 times the mass of the Earth (and 99.8% of the mass of the entire solar system.)

We seldom have a chance to see the orb of the sun like this and tend to acknowledge it, if we think about it at all, only as some vague brightness overhead.

That it is just exactly how and where it is in relationship to the Third Planet happens to be one of those “happy accidents” or Providential appointments to which we owe our very existance.

Don’t look at it. But do give it some thought next time you put on your sun glasses or close your blinds to keep it out.