One of our most environmentally-indifferent presidents once said famously that “if you’ve seen one tree, you’ve seen them all.”

I’m afraid he speaks for a large portion of Americans for whom nature is an anonymous blur out the car window or a diorama vignetted briefly Â fromÂ scenic overlooks on the way to Dollywood; or taken in frenetic gulps on family forced-march vacation hikes. Nature has no face, really, for most hurried unfortunate urban sorts. 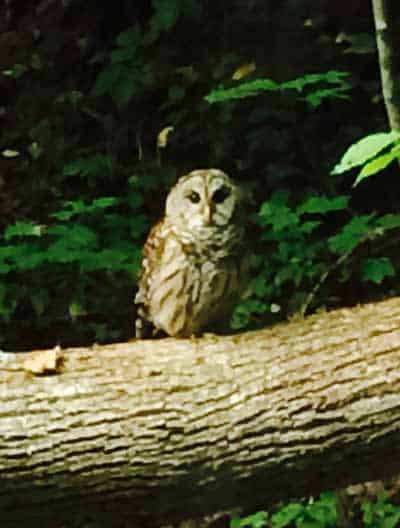 But the same seen-them-all numbness can happen to rural folk, too. If you’ve seen one deer, one snake, one owl, one bear…

I’m happy to say we have, among those generic lots of creatures, individuals we see over and over, very often the same time of day, in the same places–creatures, you might say, with particulars; with personalities.

They are our familiars. We are tempted to (and often do) give them names. We feel like we know them, and somehow that they know us. They do show less fear by habit of our presence. We even talk to them as if we half-expected to have them answer back.

This barred owl is one of Ann’s familiars. She tells me often about seeing it perched above the road as she drives to or from at earlier or later hours than I travel that same winding gravel road.

We happened past her owl the other day while he sat just beside the road on a fallen basswood trunk. We stopped. He stayed. We talked. And said goodbye, and went on our way.

Later in the day, I was sitting on the front steps at dusk, listening to the anonymous chorus of crickets, katydids and the babble of the creek. I recorded a half-minute of it below.

Not ten seconds after I turned off the recorder, an owl called just twice from behind the barn–our familiar, saying goodnight.

4 thoughts on “The Familiars of Goose Creek”