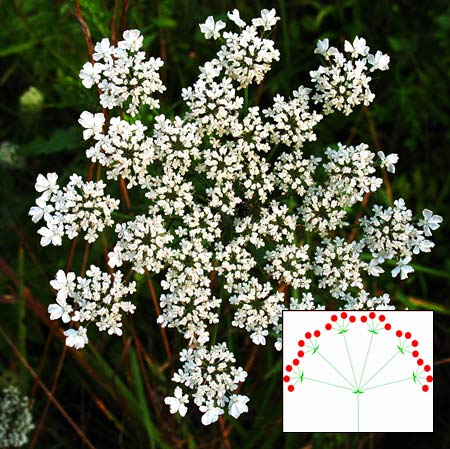 AKA Wild Carrot. “Chigger Weed”–such a common roadside and pasture wildflower that we take it for granted. But there isn’t so much of it on our place here, and roadsides are notoriously difficult places to stop and set up a tripod. So when I found this one just where we cross Goose Creek on the single-plank footbridge, I stuck the Canon Powershot on the tripod and used the macro setting to get a top-down closeup.

Queen Anne’s Lace is a member of the carrot family that, when I first learned it some decades back, was scienficially-named Umbelliferae (now Apiaceae). That name derives from the type of flat-topped inflorescence called an UMBEL that you see diagrammed in the inset. In this plant, what we have (seen from a side view of course) is an umbel of umbels–or compound umbel.

And as for the chiggers–I can’t find a thing that says that this plant is any more likely than any other to harbor the itchy little mites with which we were so familiar as kids in Alabama. They were especially fond of the hidden, tender parts as I recall. Makes me itch to think about it.

3 thoughts on “The Queen’s Lace”