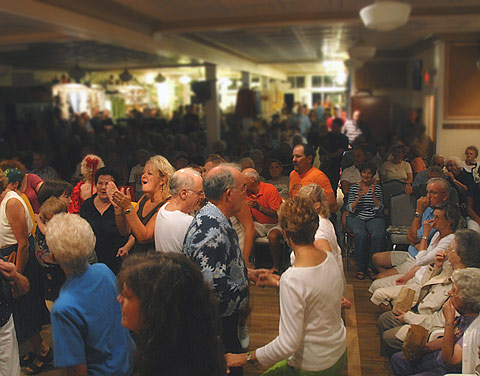 From the Floyd Country Store Friday, August 31, 2007–a typical kind of shot of folks clapping, dancing, listening to the music, people-watching, enjoying themselves. I held the camera as high as I could and pressed the shutter, accepting whatever the accidental composition might give me.

With this kind of take-what-you-get shot, it’s only after you come home to the computer monitor that you find the stories they tell. Interesting here how all the four folks sitting to the right of the dancers have their hands to their faces. When must they have gotten to the store to get those front-row seats, I wonder? I like the energy of the blond gal clapping (left of center). I like the light-dark-light perspective foreground to background.

But what I wish I’d made a point to focus on was diminutive eighty-year-old lady dancing in the red dress –her shoulders so frail that it hung loosely on her thin frame. Can you pick her out? She wore a red bow like a tiara; and where else might she have worn those ruby slippers that were hardly built for a night of dancing?

While everybody else faced the musicians on stage, this little woman performed her heart out, facing the front row audience as if center stage and everyone had come to see just her.

Later in the evening, she walked past us as we stood along the wall, back against the drink cooler. As she passed, self-possessed, fanning herself with her hand, someone told her she was looking good.

“I’m trying mighty hard to look good. Mighty hard” she admitted to no one in particular.

That’s the picture that didn’t come home. And the story. Larger Image here.

3 Comments on “The Ruby Slippers”