The Slippery Slope of Mortality

I thought I might die. Stupid way to go, really, but not unprecedented–to choke to death, at home, alone.

I could breathe, mind you. It was only a stupid bit of chip I inhaled while laughing (“My Cousin Vinny” I think was the cause) and at first it was only a mild nuisance of irritation just past the point in the back of the throat where voluntary muscles can contract to expel bits bound ominously for the trachea and parts south.

But an hour later, somehow it passed the point of no return, and my gag reflexes would have none of it. I heaved and hacked, choked and gagged–quite disturbing the poor dog. After a bit, I was on all fours, tears flooding my eyes from the general irritation of all parts from the neck up.

And in the end, it might have been a freaking heart attack that would have got me, the reflexes were so violent and unrelenting. I thought there for a while it had happened, but it turned out it was just a rib-sternum strain that got better over time. And the tickle, though I never coughed up the offending crumb, went away.

Maybe that distant brush with the hem of the garment of the Grim Reaper made me somewhat more reckless this morning than I would have otherwise been–to have (in my mind) come close to a stupid, pathetic domestic death indoors when there are many much more glamorous ways and places to go.

This morning out there alone, it could have happened on the slippery rocks. I could have screamed my bloody head off and nobody would have heard me or found me with a broken hip in the ravine for days, my smashed camera lying somewhere in the cold water at the bottom of a boulder.

But I’d have been doing what I loved, surrounded by the mountains to which I belong.

I obviously survived, but it was pretty stupid–especially the climbing up the sides of the gorge to the old road instead of retracing my steps back down the cascades of the creek to where the banks are not so steep. Had to see if I could do it. I could.

Heading home once I’d “clum up” out of the gorge, I soon passed the Four Poplars just past the Sitting Bench. I went back and sat for a few minutes, needing to catch my breath and regroup; I’d left the house on an impulse, after all.

Now it’s not likely to happen because I cannot imagine we’ll be able to afford to keep this place until we’re both gone. But if we do, I have said and at least imagine it happening that my ashes will reside down in the deep cleavage of these four massive poplar trees near my “Fortress of Solitude.” (They’re bigger than they look in this picture.)

It’s a strange thing to think about, but to do so is to give your survivors one less decision to make. So here it is: 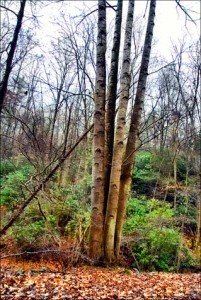 Make it a Mason Jar. And put it right down as deep in that quadfurcation as you can stick the matter that was me that didn’t matter so much in the end as the volatile spirit that once inhabited those ashes.

Come wrap your arms around one of those big trees now and then, and follow their lines up to the sky above. What a good life it was!

Is. Not going anywhere soon, if I have a thing to do with it. And an occasional brush with one’s own mortality–by chance or by choice–isn’t such a bad thing, after all.

9 Comments on “The Slippery Slope of Mortality”