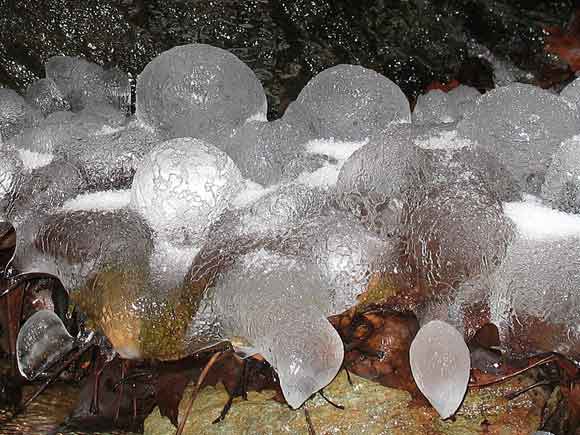 The end of the sage following Part One and Part Two: spoiler–the future blogger survived.

Sprawled spread-eagle on ice in the darkness, all I could accomplish was to make slippery snow-angels on the ice.

In time, momentum and my unproductive wallowing carried me even further down slope into what had been pasture.

At last, I managed to grab a small ice-coated sourwood to pull myself unsteadily to my knees, and finally and unsteadily, to my frozen feet. The cabin was 150 feet up hill now; I could barely make out the silhouette of the roof against a gray-pink sullen sky.

I pulled myself up the hill, tree by tree, mostly on my knees. It was exhausting work. I soon became soaked with sweat, then clammy–small wonder, what with my blood sugar falling for want of food and the hormones of emergency surging against a cooling, slowing metabolism as my core temperature fell. I needed that crockpot in the worst way.

At last, I pulled my way tree to tree, back up through the woods and onto the road; a fresh start. I was not about to step onto the driveway to the house and take a second thrill ride down to the garden.

Clutching through the spindly Rhododendrons and mountain laurels between the road and the house, I eventually made it to the bottom of the steps. I stood there, using the verb loosely, within 10 feet of the door.

But there was no way I could get to the front door up those 8 small glistening, mounded, rounded, ice-encased steps. So near and yet so far, I was on the verge of simply throwing a fit. I considered shaking my fist angrily at the heavens.

Or maybe I would just sit right down at the foot of the steps to discover for myself if it was true that freezing to death was actually not so bad once you became numb all over and your metabolism reached the point where thought and pain were merely faint ghosts of awareness.

A brilliant white tunnel of light would point to a place warm and safe, with steaming vegetable soup waiting in an alabaster bowl.

In a last twilight of consciousness before total indifference consented to defeat, I spotted an old shovel under the steps. I was able to reach it, though by this time I was not very well able to feel it in my frozen fingers.

But I was grateful for each one I conquered, as if it had been an Alpine peak. At the top of the stairs, I fumbled in the dark for some time with the key that did not seem to fit in the door lock and it occurred to me in my growing stupor that maybe I was even at the wrong house.

The world had come under a New Order for the last few hours, possibly subject to the control of the White Witch of Narnia. I wouldn’t know for sure until I got inside that door.

The lock turned in slow motion and the cabin door opened. I entered a dark womb of relative warmth, and began to reinhabit my former limbs inch by inch.

It seemed vaguely familiar there, and I understood that I should be doing something. I stood just inside the door, dumbfounded by the trauma of the past hour, shaking involuntarily.

At about that time, the phone rang, although it did not occur to me what that noise signified until the 5th or 6th ring. Oh yeah. That’s the phone, and I reached for it in slow motion. It was Ann in Carolina. She asked casually what I was up to.

“Oh, I had a little trouble getting home today” I said groggily.

“Tell you what: how ’bout I call you back after I’ve had me a little soup? It is going to be the best soup a man has ever had.”

Yep. One giant step for mankind. I kindled the fire in the stove til it cast warm flickering light into the cold shadows. I ate my soup, the best I’d ever had, cupped in my hands that held my favorite bowl, not made of alabaster but just as precious.

The last thing I remember is crawling under the covers alone, sliding peacefully into a long and dreamless sleep.