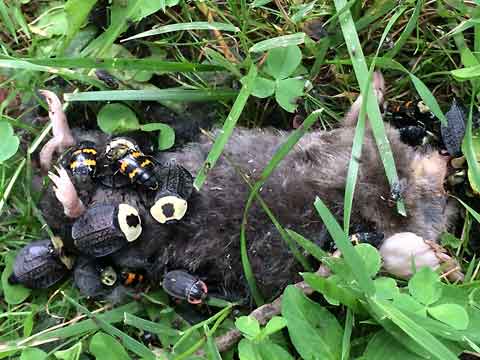 Walking back to the house from where the bear had left his calling card (in yesterday’s post), we noticed a commotion on the ground near the bridge over the branch. The ground seemed to be boiling with eyeballs–the dark spots on the white pronotums of broad flat beetles that were relative late-comers to the carcass of a recently-deceased mole.

The flies (in an assortment of sizes and shapes–look closely at the larger image linked here) had come first to the feast as they typically do when a creature makes the instant passage from alive to dead–an amazing transformation, really, that as much as any other phenomenon carries us some distance toward a “definition of life.” But more on that tomorrow, perhaps.

Not surprisingly, since there is an ongoing supply of dead things, there is a wrecking crew for that job–the beetle family Silphidae–that specializes in the location and disassembly of the cold corpus of recently-inanimate vertebrate animals. You can see at least two species here: the oval-shaped eye-spotted American Carrion Beetle and the more slender orange and black Tomentose Burying Beetle.

When you hunker down to gt a really close view of these lovelies (as I know you will now do the very next time you happen upon a corpse–if nothing else, pull over when you pass recent road kill for this opportunity!) look for this:

Tiny tan mites are often observed on the wing covers of the American Carrion beetle. Some suppose that they serve in a mutualism: they get a free ride to their next meal, and the beetle is kept free of surface bacteria.

But the story and the team-work goes much deeper than that. As soon as the flat carrion beetle lands at the work site, the mites leap off and begin eating fly eggs and even young maggots that compete with the beetle for the flesh of the frog, snake or roadkill possum.

The burying beetle, as you’ve already guessed, are excavation specialists. They dig beneath the carcass until it is in a trench, then cover it up after laying eggs in the meal, out of the reach of other beetles or flies. They will even dismember small bodies to make the burial go quicker.

I discovered with some dismay that there is a burying beetle that once was found over much of the country that is now endangered, found in only five states. Since there is still a steady supply of dead creatures, what could account for such a change for an animal whose dietary needs are always in adequate supply?

One piece of evidence apparently suggests that the extinction of the passenger pigeon may have played an early role in the eventual drastic decline of this particular burying beetle that looks very much like the ones feeding on this particular mole.

3 thoughts on “The Worms Crawl In: The Marvel of Death Part One”