↓ Skip to Main Content
Home › Environment › education › Their Tomorrow: It’s All Up in the Air

Their Tomorrow: It’s All Up in the Air 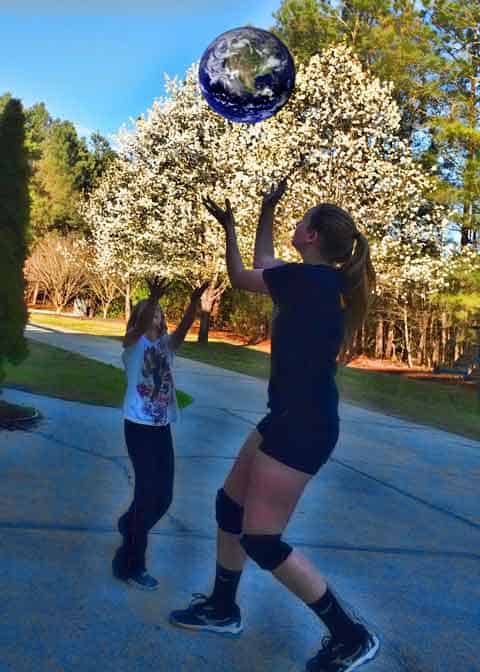 Our eldest grandchild, Abby, is in the 8th grade now. I was in the same grade in 1962. I marvel at how much life on Earth has changed since then–not just human lives but the state of all life on the planet.

Amazing, the degree of change our one species has caused in the geological blink of an eye is comparable in magnitude only to the shifts between eras caused by colliding continents, super-volcanic millennia or massive meteors slamming into Earth.

My generation has created profound ecological distress on multiple fronts–air, soil, forest, ocean–that we leave for these girls, our grandchildren.Â  Is there much hope for them to have hope in the future when they are my age now, past mid-century?

I have to believe that there is not if we continue with business as usual. There is little reason to hope for a stable, predictable future for them if today’s adults allow the Anthropocene to become the new geological epoch where no interests are served but mankind’s.

Thomas Berry, featured personality at the Saturday night movie at the Country Story in Floyd, proposes that we must hope for, plan for, and think towardsÂ  a much larger chunk of geological future than the Anthropocene (which is only a geological “epoch” lasting a few thousand years.)

Berry’s proposed Ecozoic is of a much grander scale–an era in geology-speak, lasting millions or hundreds of millions of years. And it is a prescriptive, not a descriptive, term. It implies a purposeful direction we must go, and that direction is not a choice, really, because failure to reach the Ecozoic will be terminal for countless species that might include a large portion of our own kind.

We begin to move towards the Ecozoic by reordering our relationships; by telling the New Story and seeing the future biologically; by replacing hubris with humility; by caring for people and planet and not just profit; and by acting as if we really understood that none of us are wholes. We are all part of necessary community, one species among many, and all together part of a much greater story than we’ve let ourselves comprehend.

Berry is a theologian, and ultimately, his Great Story (the title of the short movie we will see this weekend) brings the physical creation back into the Christian story. Matter is not evil. It matters to God, from the sub-atomic to the super-novae.Â  Nature is not God nor does it contain him any more than a building contains the architect who designed it. But the natural world from microcosm to macrocosm displays, in all of its myriad manifestations, the nature of the builder.

Berry’s message is not quickly or simply unpacked and I’m certain I’ve trivialized it here in this short post. It contains theological, ecological and psychological weight. And it helps us move forward towards a future I can hope for when I watch my grand daughters playing in a present that will move to quickly to their uncertain tomorrow.

1 Comment on “Their Tomorrow: It’s All Up in the Air”