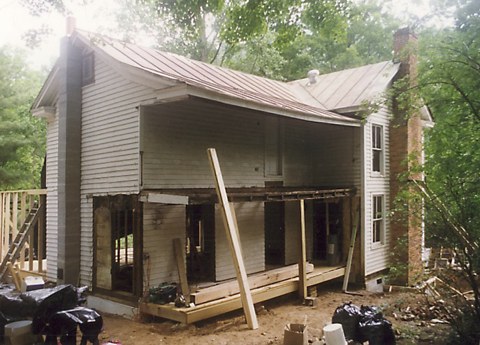 It hasn’t been many years since I bragged that I could do pretty much whatever I wanted. My minor aches and pains plus some slight decline in energy and motivation really didn’t slow me down if I set my mind to a task. And nine years ago on a chilly May morning, we had ourselves a task.

I watched the backhoe tear down the outhouse that stood where our new garden now stands. (I need to get you some more pictures.)

That was the beginning of six months of hard physical work on this place that I knew at the time would not be possible for Ann and me down the road a few years. This ticking clock was a great motivator to “just do it”. Now it’s done, been done, and we’re on the backside–a fact the last birthday has written in very large letters.

Turning sixty has been a sobering milestone for me and the illusions of still being “the kid” with unlimited possibilities ahead has pretty well passed. I’ve had the feeling with this largish round number of cycles that this just might be the final approach to the end of the line. We’ve finally become “old” I realize and accept.

But I had the tiny revelation this morning that I ought not pack my bags just yet. The vision passed before me of all the years ahead spread out in a receding timeline. One of them–only God knows and He’s not telling–will be the year I die. But let’s think about the future this way:

Given those real possibilities of life expectancy, I guess I’d better get back to thinking about what it is I want to do when I grow up.

Each morning even yet is full of new possibilities–not all of the ones available on the menu ten years ago, but enough to make the selection an interesting proposition over the morning’s coffee.

And you’d think maybe 60 years of experience, skill, perspective and a smattering of wisdom could be useful for something between now and 2043.

Think I’ll fetch another cup and ponder that idea a bit.